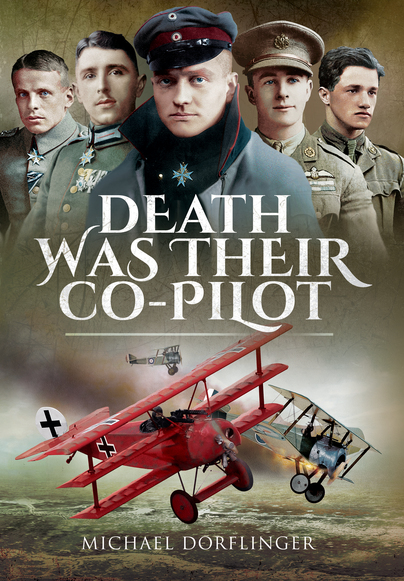 Death Was Their Co-Pilot (ePub)

Aces of the Skies

Click here for help on how to download our eBooks
Add to Basket
Add to Wishlist
You'll be £4.99 closer to your next £10.00 credit when you purchase Death Was Their Co-Pilot. What's this?
Need a currency converter? Check XE.com for live rates

It was in World War I that the skies first became a battlefield, with nations seeking to decide military outcomes off the ground. This volume introduces the fighter pilots of World War I, including the infamous “Red Baron” Manfred von Richthofen. In addition to this iconic flying ace, the author presents the thrilling biographies of numerous others and recounts their exploits and the tragedies they suffered. Likewise, the book illustrates the Great War’s historical background and documents the increasing sophistication of aviation technology and warfare.

For anyone wanting an accessible and slightly gossipy guide to the great aces of the First World War, this volume is as good a place as any to start and Dörflinger’s way of illustrating the peccadillos of these extraordinary men certainly livened up some of the stories I had read before.

This book does its job well enough, providing brief biographies of the principal aces of the war plus a basic overview of the development of air fighting, the principal types of aeroplane used and the air services of the countries involved.

This is an unusual book, giving sometimes surprising insights into those violent and heroic days.

Dorflinger's work introduces the reader to a number of these aces from both sides of the war. Their exploits, triumphs, and tragedies are all recounted in detail.


I was drawn to read these books as I have had an abiding interest in the aviators of the Great War ever since my father used to tell me bedtime stories (more than 50 years ago) of Ball, Mannock, Bishop and McCudden. I thought that a book from a German author, previously unknown to me, might give me an interesting new perspective. By contrast, Norman Franks is very well-known as one of the world’s leading authorities on the subject and any book he writes is highly likely to be well-researched and authoritative. I also thought that his chosen subject was an intriguing idea, consisting as it does, of more than 90 brief biographies.

There is no doubt that Michael Dörflinger has a deep interest in the airmen of the First World War, particularly those from the Central Powers (Imperial Germany and Austria), as opposed to what he calls the Entente Powers (Britain, France, Russia, Belgium, Italy and the USA). He has amassed a considerable amount of biographical information. He includes many photos which I had not seen before – particularly those depicting German airmen. However, the book is hampered by the author’s writing style, which lacks fluency and tends to jump about from place to place. I do not think that this is the effect of being translated from the original German. I believe that it would have been much better had the script been more tightly edited and revised, as in its present form it reads to me like a collection of notes which have been assembled rather than a fully developed and coherent account. The author makes many assertions and statements but does not follow them up satisfactorily, and some are simply wrong. On page 93, ‘In 1928 he [Willy Coppens] broke the world record for parachuting.’ I am really not sure what this means. Page 100, ‘Rickenbacker came from a region the US Army traditionally found many recruits.’ Even if true I do not really see the relevance. Page 105, ‘Jack Morris Wright wrote…’. We only find out much later who he was. Page 110 the photo caption is incorrect. Page xx we are told Gitterschwanz is contemporary German slang for aircraft with an open framework of metal tubes behind the cockpit [eg DH2, FE2B] but on page 144 two BE2 are said to be Gitterschwanz. Page 160 Billy Mitchell was not ‘reduced to the ranks’. Page 179 ‘the BF two seater was a very dangerous customer’ [Bristol Fighter?] appears in another paragraph on Gitterschwanz. Page 182 the DH4 did not have a 400 hp engine, the DH9a did. Page 184 the photo is of the SE5a and not a Sopwith Camel as captioned.

The overall effect is of a series of sketches loosely collated and put more or less in order. It is not an easy read. It also lacks an index and references to nearly all the many quotes in the text. The book is not without some interest but in my opinion is not up to Pen & Sword’s usual very high standards.

The book is filled with so many stories of heroism and patriotism, it is hard to pick the best examples. So many on each side returned to the fray in physical and mental conditions that should have kept them in a hospital bed, and not a cockpit.

The other fronts besides the Western are touched on, as is the evolution of both armaments and the actual planes themselves. If you are looking for a book that shows the facts and figures, but also goes deep beyond them, then this book is for you.

This collection of biographies of WWI fighter pilots makes for compelling reading. This is a collection of portraits of men who are now as much myth and legend as history. A totally absorbing story that should not be missed.

The narrative provides wide and harrowing descriptions of the action, experience and confrontation these men experienced while in the air. One such description tells us that the 'airspace of the hunt swarmed with red, white and blue rounders which were all fighter aircraft. It required a tremendous amount of energy to keep the upper hand, especially since our aircraft were forced continually to intercept from below and prevent them breaking through to the artillery and infantry flyers'.

The book is compliment by striking photographs and is an outstanding tribute and testimony to these brave men, who should not be forgotten. They are all very poignant. One of the most striking is that of Albert Ball standing with aeroplane propeller. He who was one of the few fighter pilots who became a British folk hero. He received the Victoria Cross posthumously. The author states that in Britain he was considered the fighter pilot without equal. Given the courage that all of these men displayed as made to lucid in this book, this is quite a powerful tribute.