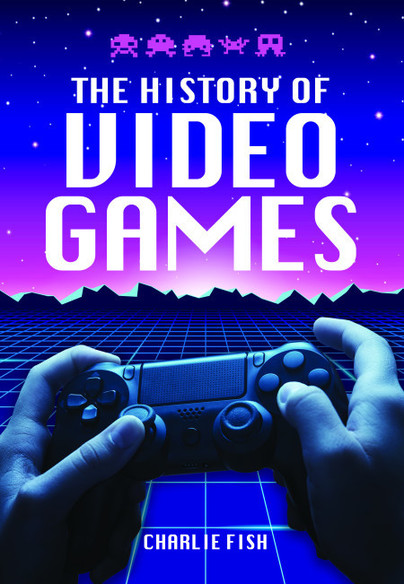 The History of Video Games (Hardback)

Add to Basket
Add to Wishlist
You'll be £20.00 closer to your next £10.00 credit when you purchase The History of Video Games. What's this?
+£4.50 UK Delivery or free UK delivery if order is over £35
(click here for international delivery rates)

This book is a potted history of video games, telling all the rollercoaster stories of this fascinating young industry that’s now twice as big globally than the film and music industries combined. Each chapter explores the history of video games through a different lens, giving a uniquely well-rounded overview.

Packed with pictures and stats, this book is for video gamers nostalgic for the good old days of gaming, and young gamers curious about how it all began. If you’ve ever enjoyed a video game, or you just want to see what all the fuss is about, this book is for you.

There are stories about the experimental games of the 1950s and 1960s; the advent of home gaming in the 1970s; the explosion – and implosion – of arcade gaming in the 1980s; the console wars of the 1990s; the growth of online and mobile games in the 2000s; and we get right up to date with the 2010s, including such cultural phenomena as twitch.tv, the Gamergate scandal, and Fortnite.

But rather than telling the whole story from beginning to end, each chapter covers the history of video games from a different angle: platforms and technology, people and personalities, companies and capitalism, gender and representation, culture, community, and finally the games themselves.

Despite being relatively short, this is a fantastically detailed account of the history of electronic gaming. A fun, informative read.

This is the first time reviewing a book where I have lived through the subject the book is going on about. I remember my Dad getting a family computer in the early 80’s, and I think the first game was one called Android Attack and you loaded the game through a cassette player. The book certainly brought back lots of memories and it was great to see the old characters, and find out about the history of them. This was a really good book that I thoroughly enjoyed.

First things first, wow. This book was packed with so much information about the history behind video games. I loved playing video games as a child. Coming home from school and playing Donkey Kong Country is so vivid in my mind, it feels like yesterday. But learning how far video games have come and what some of the original video games looked like, it's almost unbelievable to think we have the games that we have now.

I admit that I had never researched video game history. I honestly thought video games first popped up in the 80's and went from there. But knowing that video games are from way before that really blew my mind. This book makes me wonder what original video game pioneers would think of how far gaming has come now. We can essentially have video games in our pocket, and to think they were at one point huge machines is so amazing.

I recommend this book to gamers, game designers, game developers, or anyone who works in the gaming industry. Even history buffs would enjoy this book.

This is an insightful non fiction on the history of video games, and it does what the title says- gives you the history. As a big gamer from a young age, i keep up with the newest releases and spend hours playing them, but to learn the history behind the industry, animation and everything that goes into videogames was very interesting. Also very well researched!

A must read for gamers.

I would definitely recommend this book to anyone looking for a fairly concise history of videogames, I've read a lot of similar books in the past (especially when I briefly worked for a gaming website), but honestly this is probably one of the best I've come across.

Having lived through the growth of gaming era, this was a fun walk through the past. My first gaming experiences came from playing the arcade game Space Invaders and a first ti me two-and-a-half-hour binge on Pac-Man, where a buddy of mine and I played so long and hard we rubbed the skin off our pointing fingers and developed blisters. Fanatics aren’t born, they are created.

Author Charlie Fish’s book starts way before my initial experiences, opening the door to a time when games were birthed in companies and at universities. The book is nicely split into sensible chapters, which include platforms, the most important creators, companies and marketing, gender representation, and the games themselves. His choice to break the games discussion into decades was a good idea, as the gamer universe is huge and recent games would have dwarfed their ancestors. This enabled a balanced view of the games most popular in the 80s, 90s, etc. I also enjoyed the numerous colored pictures of the various consoles and games.

Charlie Fish is a celebrated short story writer and screenwriter. Since 1996, he has edited www.fictionontheweb.co.uk, the longest-running short story site on the web. He was born in Mount Kisco, New York in 1980; and now lives in south London with his wife and daughters. His first experience of video gaming was a Donkey Kong II Game & Watch, and he has never looked back.