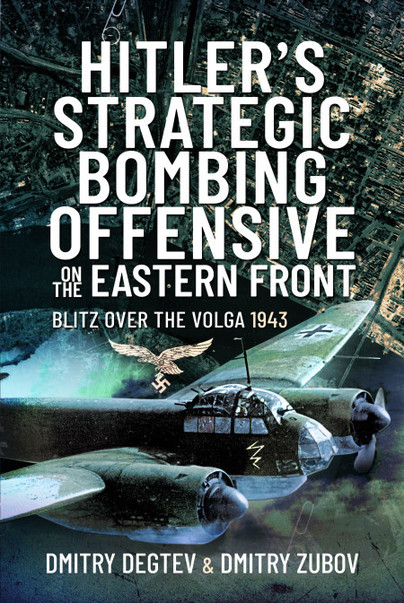 Add to Basket
Add to Wishlist
You'll be £25.00 closer to your next £10.00 credit when you purchase Hitler's Strategic Bombing Offensive on the Eastern Front. What's this?
+£4.50 UK Delivery or free UK delivery if order is over £35
(click here for international delivery rates)

Germany was never able to match the power of the Allied air forces with their great four-engine bombers, the Lancasters, Liberators and Flying Fortresses. Indeed, many have ascribed the defeat of Germany in the Second World to its lack of a strategic bombing force. There were, though, two occasions when the Luftwaffe’s twin-engine bombers undertook strategic objectives on a large scale. The first of these was the ‘Blitz’ of 1940-1941, in which the Luftwaffe attempted to wreck Britain’s industrial and military capacity. The second was on the eve of Operation Zitadelle, a major offensive against Soviet forces in the Kursk salient

Hitler’s objective was to replicate the successful Allied mass-bombing of German cities, the Luftwaffe being tasked with destroying the main tank and aircraft production facilities and fuel depots. Hitler saw this as the necessary prelude to weaken the Russians before the ‘decisive’ onslaught of Zitadelle.

The aerial operation, Carmen II, lasted for a month and covered a huge target area from the Rybinsk reservoir to the Caspian Sea. For these complex and risky night missions, all the Ju-88 and &#1053;&#1077;-111 bombers available to Hitler in the East were employed..

The authors have collected a huge amount of factual material, reconstructing all the details of this little-known campaign, which was the largest operation Luftwaffe on the Eastern front. This book opens a completely new page in the history of the German air war and provides a comprehensive investigation into the nature of the targets attacked, the degree of damage suffered by the Soviet military machine, and how this affected Operation Zitadelle.

The descriptions of the dangerous missions carried out by Luftwaffe as part of this operation are presented in great detail and all these exclusive facts are complemented by a large number of unique photos and documents.

This book is an excellent and fascinating book looking at an area of history either misunderstood or most certainly not talked about much. Hitler’s Luftwaffe had been turned from the western front to the Eastern Front, and through records, statements and evidence we learn about the blitz over the Volga. What does this book a truly good service is the excellent photographs and diagrams and records pictured throughout the book.

A fascinating account of Hitler's attempts to bring the Eastern Front to its knees with a targeted bombing attack...

"...offers vast new detail and a fascinating, important reappraisal of what a handful of Luftwaffe twin-engine 'Nazgul' bombers accomplished with a few nighttime raids on Soviet industrial facilities. Highly recommended."

The book is certainly a rewarding read and is a valuable addition to our understanding of the war on the Eastern Front.

The authors are unsparing in their analysis of Soviet operational and organisational shortcomings in defending against the German air bombardment, producing a balanced account of the Operation from both sides. Extensive use is made of Soviet and German archives, together with more recent work, to build a compelling account.

This is a fascinating account, from many perspectives, of a phase in, what to the Russians is known as ‘The Great Patriotic War’.