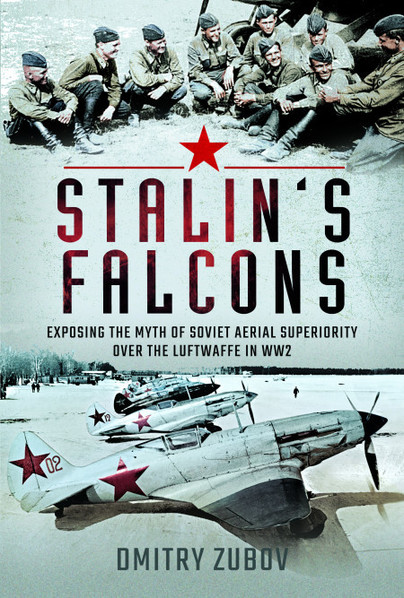 Preorder
Add to Wishlist
You'll be £20.00 closer to your next £10.00 credit when you purchase Stalin's Falcons. What's this?
+£4.50 UK Delivery or free UK delivery if order is over £35
(click here for international delivery rates)

The Soviet history of the Second World War, written under the conditions of a totalitarian regime, reflected all its features, with the result that it includes solid sets of patriotic fables that have no connection with reality. Many of the events of the war were distorted beyond recognition or even made up from beginning to end.

Archives containing original documents were available only to selected, specially verified KGB ‘historians’ who presented only the version of the war that was acceptable to the Soviet regime. After the collapse of the Soviet Union, the process of declassifying archives and gaining wide access to information gradually began to reveal the terrible truth of the crimes of the Soviet regime. One of which, of course, was the incompetent leadership of the Red Army, which led to massive loss of life across the military and civilians alike.

However, the consequences of decades of Soviet propaganda had a strong impact on both Russian and world historical science. Because of this, not only Russian, but, unfortunately, many European and American historians found themselves repeating the Soviet myths they had been fed.

The history of Soviet fighter aircraft did not escape this fate. The tale of Stalin’s so-called ‘Falcons’, who allegedly shot down dozens and even hundreds of Luftwaffe aircraft, was persistently drummed into the heads of many generations of Russian people. These heroes, supposedly, flew Soviet fighters whose technical characteristics were many times superior to their German counterparts, with the result that Luftwaffe aces were reportedly afraid of meeting them in the air. These primitive propaganda clichés became a model for describing the actions of Stalin’s fighter aircraft.

In this stunning exposé, Stalin’s Falcons reveals the stark and dark truth of the terrible losses suffered by Soviet flyers, the inferiority of the Russian aircraft and the almost slave-like conditions in which those aircraft were made.