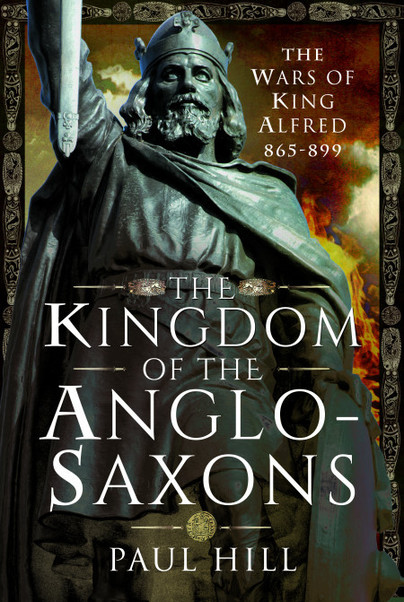 The Kingdom of the Anglo-Saxons (Hardback)

Add to Basket
Add to Wishlist
You'll be £25.00 closer to your next £10.00 credit when you purchase The Kingdom of the Anglo-Saxons. What's this?
+£4.50 UK Delivery or free UK delivery if order is over £40
(click here for international delivery rates)

In this compelling military and political history of the Anglo-Saxon kingdom, Paul Hill explores England’s birth amidst the devastation and fury of the Danish invasions of the ninth century. He provides insight into the English response to the new challenges of warfare in these years of turbulence and danger.

Alfred the Great, youngest son of King Æthelwulf, took control of the last surviving Anglo-Saxon kingdom, bringing Wessex and the ‘English’ parts of Mercia together into a new ‘Kingdom of the Anglo-Saxons’. This is a story of betrayal and of vengeance, of turncoat oath-breakers and loyal commanders, of battles fought and won against the odds.

But above all, this is the story of how England came into being.

Warfare in Alfred’s England changed from attritional set-piece battles to a grander strategic concern. This is explored, demonstrating how defence-in-depth fortification networks were built across the resurgent kingdom in the wake of Alfred’s victory at Edington in 878. The arrival of new Danish armies into England in the 890s would lead to campaigns quite unlike those of the Great Heathen Army of the previous generation.

This is a human, as well as a military story: how a king demonstrated his right to rule was important. Alfred sought to secure the succession on his son Edward, who led his own forces as a young man in the 890s. But not everybody was happy in Alfred’s England. Despite the ever-present threat from the Danes, the greatest challenge facing Alfred arose from his own kin, centred deep in the heart of ancient Wessex. Alfred knew very well that his was not the only branch of the family who claimed a right to rule.

Paul Hill's latest book is an excellent study of the military and political situation in England under King Alfred the Great. The early chapters provide the background, recounting events of a few centuries earlier and how Wessex rose to prominence.

There are some useful subsections about key figures or places, such as the development of Gloucester as a population centre and fortified city. The author also explores some interesting theories: for example, was Alfred even legitimate? What exactly was the status of his mother? Was she a wife or a concubine of King Athelwulf?

In case readers are worried that this might be a rehash of Paul Hill’s previous two titles on Anglo-Saxon warfare, I can assure them it is not. I have read both "The Anglo Saxons at War" and "The Viking Wars of Alfred the Great", and they're quite different from this book. The former goes a lot more into the mechanics of war and weapons, whereas this book examines the social and political background more.
There is enough new material here to justify this new book, and its scholarly enough to please the academic. Yet it’s also quite readable and provides enough context and background for the general reader too.

This was an interesting look at the Anglo - Saxon kingdom of England, I would highly recommend this book to medieval history buffs and medievalists.

If you are interested in Alfred or Royal history in general then this book is well worth getting hold of.

For someone like me, who thinks that Bernard Cornwell's Last Kingdom series is the finest example of historical novelisation in the English language, Paul Hill's books, the first of a series of four, is a must-have companion to the events described in Bernard's books. It's well written, it contains many of the characters from the novels, including Bishop Asser, Ivar the Boneless etc., and, of course, Alfred himself, it's well illustrated, and it's the perfect example of how a history text book should be. Brilliant.

In The Kingdom of the Anglo-Saxons, Paul Hill walks you from the leaders leading up to and then through the lifetime of King Alfred the Great. I felt that Hill is the kind of author who not only knows what he's talking about, but he can also convey information in such a way that even a layperson can easily understand what is happening in this confusing time period. I appreciated that Hill would include theories from different schools of thought when if came to identities of people close to Alfred, or troop movements.

All in all, I found it a fairly easy read and would recommend this to anyone looking to learn about this time period.

A good book about a interesting and influential time of British history. A definite read for anyone interested in this area of history.

Readers with a particular interest in the reign of Alfred the Great, the late 800s or the 9th century, and who know of Alfred's role as a Charlemagne type figure who advocated for literacy as well as recognizing the value of books and learning, will greatly enjoy this expanded history of England at the time of his reign and more of the wider historical context. In particular, some of the images included within, such as of the will of King Alfred, are stunning and will be of great interest to readers wishing to know more about this era. Other significant images include areas Hyde Abbey. The Alfred Jewel is a spectacular piece of craftsmanship and the high quality graphics are excellent in this book.

Overall, this book is a well-researched and comprehensive overview of this era of Britain's history.

Topics included are:
* Uniting the kingdoms of Wessex and Mercia
* "The Anglo-Saxon Chronicle"
* The Lindisfarne Gospels
* Marchlanders
* Coins from the era
* Battle memorials
* Maps
* Aetheldred
* Annals of Ulster
* Significant churches

Paul Hill is one of those special authors who is deeply entrenched in the work he is doing but also realizes just how confusing reaching back into history can be. It makes for a very entertaining read in The Kingdom of the Anglo-Saxons.

Hill takes you step by step through the time just before and during the life of Alfred the Great. Along the way, we are introduced to many characters who are cloaked in the mist of history. Hill is adept at making sure to separate fact, conjecture, and just straight fiction. He keeps the reader engaged with witty observations and more importantly, the deft touch of a teacher rather than a lecturer. I laughed out loud multiple times when Hill admits how confusing it can be to figure out if these historical figures are the same people or separate people with the same name.

A scholarly work can often veer into a dry restatement of facts. Hill adds a bit of fun and it makes for a very readable book.

Solid account of the rise of the 'Danish' threat in 9th century England, and the wars fought in the lifetime of Alfred the Great - including those of his predecessors as King of Wessex. It's not always a simple tale to tell. As with most academically rigorous histories of poorly documented periods, there are often multiple possible versions of what happened and where, and a lot of the details are either in doubt or simply unknown. Nonetheless, the prose is readable and the author does a good job of explaining the possible interpretations and the one that they believe is most likely.

If you have an interest in the period and want something that delves a bit deeper than a 'popular history' account, this is a solid offering to check out.