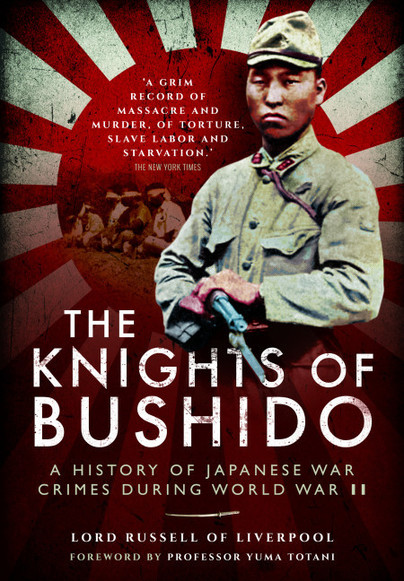 The Knights of Bushido (Paperback)

A History of Japanese War Crimes during World War II

Add to Basket
Add to Wishlist
You'll be £16.99 closer to your next £10.00 credit when you purchase The Knights of Bushido. What's this?
+£4.50 UK Delivery or free UK delivery if order is over £35
(click here for international delivery rates)

'[Reveals] the full horror of a warped version of Bushido. It is not a pleasant read, but a necessary one.' Russ Lockwood, Magweb

The war crimes trials at Nuremberg and Tokyo meted out the Allies' official justice; Lord Russell of Liverpool's sensational bestselling books on the Axis' war crimes decided the public's opinion. The Knights of Bushido, Russell's shocking account of Japanese brutality in the Pacific in World War II, describes how the noble founding principles of the Empire of Japan were perverted by the military into a systematic campaign of torture, murder, starvation, rape and destruction.

Notorious incidents like the Nanking Massacre and the Bataan Death March emerge as merely part of a pattern of human rights abuses. Undoubtedly formidable soldiers, the Japanese were terrible conquerors. Their conduct in the Pacific is a harrowing example of the doctrine of mutual destruction carried to the extreme, and begs the question of what is acceptable – and unacceptable – in total war.

A stark reminder of the dangers of appeasement and pacifism in the face of a fanatical and non-democratic enemy.

[Reveals] the full horror of a warped version of Bushido. It is not a pleasant read, but a necessary one, to remind ourselves of two things - that fanaticism in pursuit of tyranny begets atrocities, and that such fanatics, when finally overthrown and captured, must be imprisoned and/or executed to atone for their crimes. The Nuremberg Trials got all the press, but the Tokyo Tribunal proved no less effective in ending state-organized murder in Japan.

Russ Lockwood on the Magweb Site