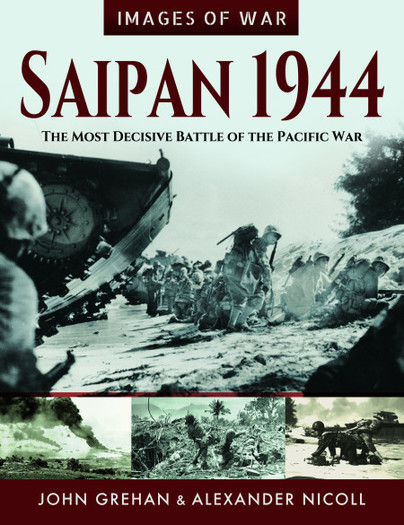 The Most Decisive Battle of the Pacific War

After the astonishing Japanese successes of 1941 and early 1942, the Allies began to fight back. After victories at Guadalcanal, Coral Sea, Midway and other islands in the Pacific, by 1944, the Japanese had been pushed back onto the defensive. Yet there was no sign of an end to the war, as the Japanese mainland was beyond the reach of land-based heavy bombers. So, in the spring of 1944, the focus of attention turned to the Mariana Islands – Guam, Saipan and Tinian – which were close enough to Tokyo to place the Japanese capital within the operational range of the new Boeing B-29 Superfortress.

The attack upon Saipan, the most heavily-defended of the Marianas, took the Japanese by surprise, but over the course of more than three weeks, the 29,000 Japanese defenders defied the might of 71,000 US Marines and infantry, supported by fifteen battleships and eleven cruisers. The storming of the beaches and the mountainous interior cost the US troops dearly, in what was the most-costly battle to date in the Pacific War.

Eventually, after three weeks of savage fighting, which saw the Japanese who refused to surrender being burned to death in their caves, the enemy commander, Lieutenant General Saito, was left with just 3,000 able-bodied men and he ordered them to deliver a final suicide banzai charge. With the wounded limping behind, along with numbers of civilians, the Japanese overran two US battalions, before the 4,500 men were wiped out. It was the largest banzai attack of the Pacific War.

As well as placing the Americans within striking distance of Tokyo, the capture of Saipan also opened the way for General MacArthur to mount his invasion of the Philippines and resulted in the resignation of the Japanese Prime Minister Tojo. One Japanese admiral admitted that ‘Our war was lost with the loss of Saipan’. This is a highly illustrated story of what US General Holland Smith called ‘the decisive battle of the Pacific offensive’. It was, he added, the offensive that ‘opened the way to the Japanese home islands’.

This is a solid addition to the series.

"...the book contains the same wonderful collection of photographs as previous volumes."

This offering from Pen and Sword, provides a tasteful view of the taking of Saipan in 1944. With this battle being against the Japanese, it is hard to avoid covering the brutality of war, especially when you consider that 3,500 Japanese soldiers were committed to the largest Banzai attack ever, and behind these 3,500 followed up the walking wounded. With the images covering various aspects of warfare, it makes this offering particularly visually interesting due to its scope.

"With superb narration and cogent captions of the choicest 180 black and white photographs from America’s military archival sources, many now published for the first time, the book promises to prove of greatest interest to all military fans, whether buff, scholar, historian, author, and photographer, as well as every other American citizen."

"Highly Recommended for anyone interested in the Pacific War island hopping campaign in the Marianas."

Recommended to any student of WW2, Model-maker or Historian.

Saipan in 1944 was a pivotal part of WWII, in that it helped bring about the end of the war in the Far East. Saipan was such a heavily defended and fortified island, the hell on both sides would have been great. I think what really struck me when reading this book and I have read a few, it just struck me the amount of hardship and suffering that went on and this was through reading the great history published here. The thing about the photos that caught my attention was the utter devastation unleashed, this knowledge and evidence is so clearly important to be kept to warn against the devastation that war brings. A really solid book that I have really enjoyed and would recommend to others most certainly.

"For the reader unfamiliar with the Pacific Theatre in WW2 this work is a very good introduction to the sheer intensity of the fighting on land, sea and in the air as well as a sound view of the Invasion of Saipan and its strategic importance to both Japan and the Allies."

The conquest of Saipan was a vicious battle, but one which directly contributed to the end of the war by providing an airbase from which bombers could operate, and these of course eventually included those which dropped the atomic bombs on Hiroshima and Nagasaki. Helpful text to set the scene in each chapter, while the extensive captions to a very fine collection of archive images adding the rest. Some of these don't pull punches, and the human cost of the operation is clear. For those interested in the history of the Pacific War, this is well worth seeing.