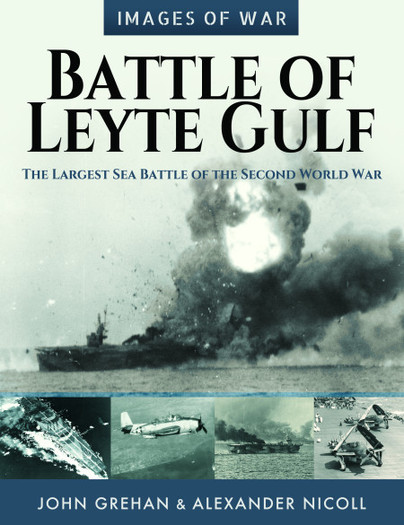 The Largest Sea Battle of the Second World War

Add to Basket
Add to Wishlist
You'll be £14.99 closer to your next £10.00 credit when you purchase Battle of Leyte Gulf. What's this?
+£4.50 UK Delivery or free UK delivery if order is over £35
(click here for international delivery rates)

By early 1944, offensives undertaken by the United States armed forces had driven the Japanese from many of their conquests in the south and central Pacific. The next American move was to sever Tokyo’s communications with the remaining Japanese garrisons and interdict the supplies of raw materials essential to Japan’s war effort. Before this could be achieved it was considered essential to eliminate the land-based air forces in the Philippines which were regarded as too powerful to by-pass.

The American plan was to land on the eastern Philippine island of Leyte and, once fully established there, to move against the island of Mindoro. At this point, US forces would then launch their main assault upon Luzon and the Philippine capital, Manila.

On 20 October 1944, the US Sixth Army began landing on Leyte’s eastern coast, supported by the US Navy’s 3rd and 7th fleets, which were assisted by ships from the Royal Australian Navy. The Japanese were aware that the Americans were poised to attack the Philippines and planned to draw the American warships into one last great battle to try and stave off the otherwise inevitable defeat.

Over the course of the following three days, the two naval forces engaged in four separate engagements. Involving more than 360 ships and 200,000 naval personnel, the battle was the greatest naval encounter of the Second World War and possibly the largest naval battle in history.

The result was disastrous for the Japanese who lost three battleships, four aircraft carriers, ten cruisers and eleven destroyers, along with almost 300 aircraft – the greatest loss of ships and crew the Japanese had ever experienced. In Battle of Leyte Gulf, the actions of the warships as well as the accompanying amphibious landings on Leyte by the US Sixth Army are vividly revealed through a dramatic collection of photographs depicting the ships, sailors, airmen and soldiers who made history.


As featured in: 'Book of the Month'

This battle in the Pacific was the biggest of the second world war, and involved over 360 ships. These books are always such great reading because for example in this book we get the whole story and most of the detail. This book is split into 7 chapters after it informs the reader on the Invasion of the Philippines. We then get chapters on Leyte Landings, the Japanese Naval Forces, the Battle of the Sibuyan Sea, the Battle of the Sulu Sea, the Battle off Samar, the Battle off Cape Engana, and the consequences and conclusions of these. This is a fantastic book telling you the story of the events supplied with some fantastic photographs taken from every angle possible. Ann excellent book all round and is a credit to the Images of War series.

The supporting text with the picture caption are extensive and a key element in telling the full story. Another fine addition to the Image of War series.