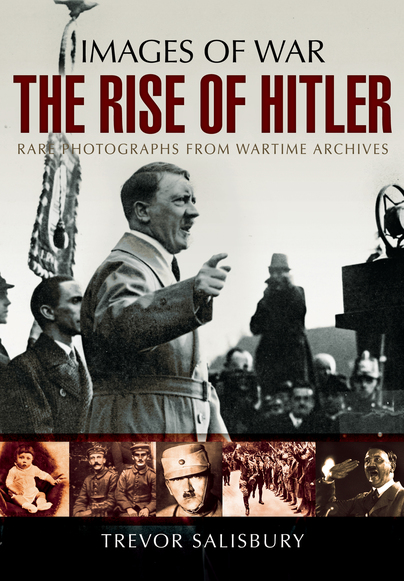 The Rise of Hitler (Paperback)

As seen in the Daily Express

You'll be £14.99 closer to your next £10.00 credit when you purchase The Rise of Hitler. What's this?
+£4.50 UK Delivery or free UK delivery if order is over £35
(click here for international delivery rates)

In 1945, amidst the ruins of a bomb-damaged German home a tattered book, Deutschland Erwache, was recovered as a souvenir by a British soldier. This rare and invaluable primary resource now forms the basis of The Rise of Hitler Illustrated, which is a photographic record of Hitlers' rise to power from when he was born in 1889, as he took over the hearts and minds of the German people, and his eventual arrival at the top.

The original book is typical of the propaganda of the time, with the obvious non-critical acceptance of everything that Adolf Hitler was and what he stood for. It attempts to present him as a peace–loving man, who wanted nothing other than quiet in his 'beloved Alps', who dearly loved children and was kind to all. But as we all know, the truth was completely different. He was a man who, despite his unbounded evilness, was able to assert limitless power over a nation before creating maximum misery for millions.

When found, the original book was divest of its cover and all the worse for wear, but Trevor Salisbury has gone to every effort to salvage some of the images, the result – a fresh and new perspective that sheds light on Hitler's control of Germany. It is a welcome addition to Pen & Sword's highly acclaimed Images of War series.

In 1945, amidst the ruins of a bomb damaged German home, a tattered book Deutschland Erwache (roughly translated, ‘Germany wakes’) was recovered as a souvenir by a British soldier. This primary source now forms the basis for this present title in the Images of War series, which in turn is a photographic record of Hitler’s rise to power from when he was born in 1889, as he took over the hearts and minds of the German people to his emergence as their leader. The original book was typical of the propaganda of the time, with non-critical acceptance of everything Hitler was and stood for, presenting him as a peace loving man who wanted a quiet life in the mountains. The truth was, as is now known, somewhat different. When found, the original book was in a poor state, but Mr Salisbury has translated sections of the original text as well as the photograph captions, in addition to going to some effort to salvage a selection of the images it contained, with the result, presented here, of providing the reader with a new and fresh pictorial perspective on Hitler’s control of Germany.

This books fits very nicely with "With Hitler in the West", when the dominance achieved by Hitler in peace was translated into superiority in war, cementing the peacetime expansion of Germany under the Nazis. There is a very good selection if images and adequate text in their support. The photo essay with appeal to all those with an interest in the greatest global conflict. Most recommended.

The original German captions are still present with their English translations underneath so it makes for clear reading and understanding.

It highlights some very interesting aspects of Hitler as a political animal and a master manipulator...A fabulously revealing period piece, ending ominously with images taken just before the outbreak of World War II when Hitler, 'the man of the people', took his people to the brink of destruction.