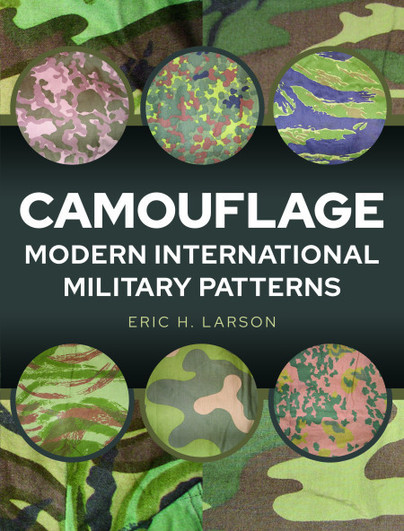 Click here for help on how to download our eBooks
Add to Basket
Add to Wishlist
You'll be £4.99 closer to your next £10.00 credit when you purchase Camouflage. What's this?
Need a currency converter? Check XE.com for live rates

A comprehensive, accurate, and academically-supported reference of all of the major military and paramilitary camouflage patterns that have been in use around the world from the end of World War Two to today.

This book will be a one-stop, generalized reference illustrating as many patterns as have been researched into the present time period. It will surpass all previous efforts. In addition to color tiles illustrating camouflage patterns it will include photographs of the designs actually being worn by military and paramilitary personnel, something few other references have done in suitable combination.

This offering is a great release for the figure modeller interested in camouflage following the period after World War 2. Its biggest value comes to the fore when looking for information on the camouflage used by the troops that are not part of the NATO alliance or what was the Eastern BLOC. The price is high, but at the same time very good value for what this book offers the reader. Something that I really like about this title is the ease of navigation only requiring that you know which continent the country is in.

The best way to describe Camouflage by Eric Larson is to share a funny story. I received the book and showed it to my husband. He was surprised that there is a book about camouflage fabrics, so he opened it and looked at a random page, then turned to another page, and another before saying… this is actually very interesting. I imagine this is the sort of reaction people would get when looking at the book, starting with “why” to “wow, that’s fascinating stuff”. Of course, I loved the book, hence the very well deserved 5 stars.

This is a comprehensive reference book on the military and paramilitary camouflage patterns from around 200 countries and, even more, it contains old(er) types of fabric too, after WWII to modern day fabrics. Some of the fabrics are unusual, so much that I wouldn’t have said that these are camouflage patterns. Naturally camouflage is different for snow, desert, or green fields, but even those are so very different.

I highly recommend the book. It has a lot of fascinating details on these patterns and it is also fascinating to look into the patterns of political thought (pun intended) when some camouflage was created and used. The information is presented by country, but it’s easy to look at differences and similarities between neighbouring countries as they are ordered by continent too.

"This is the book to have for any modeler working on modern armor and who wants to add a figure that corresponds with the country they are portraying."

This book is encyclopedic in its breadth and depth. It covers practically every country (I counted almost 200 in the index), both in existence now and during the last 70 years. It includes the armed forces, other camouflage-wearing government departments and, where appropriate, insurgent organisations that have worn specific varieties of camouflage pattern.

For each country there is a brief history since WW2, in particular looking at significant changes in their militaries. As you would imagine, much of the book is taken up of predominantly colour photos, supporting that text. The book runs to nearly 500 pages, with over 600 photos, and is A4/Foolscap in size: this is a doorstop of a book, filled to the brim with everything you could possibly want to know about military and paramilitary camouflage patterns.

This superb reference book is organised by continent and then alphabetically by country name. It covers Africa, the Americas, Asia, Europe and Oceania. Each country has a highly informative text and plenty of photographs illustrating the various patterns in use. It is not a cheap book at GBP £50, but it does offer excellent value for money. Any serious collector of post-Second World War camouflage uniforms must seriously consider getting a copy and so too should uniform manufacturers / researchers as this book would significantly aid development of future patterns. In summary, it is the reference book on the subject and well worth the price tag.

A Beautifully illustrated book about all aspects of military camouflage.

Modeller? OSInt nerd? Fashionista? Buyer of TACTICAL SPECIAL FORCES!!! listings on eBay? Even someone looking for presents for military obsessives?
It's quite likely worth getting.

For the military enthusiast and historian, the re-enactor and the modeller, this is simply a stunning reference. At full price, this is not a cheap book, but when you see what you get for the money, this is without doubt a magnificent reference to have on your bookshelf. Camouflage uniforms are primarily designed to help conceal the wearer in any particular environment. Some countries still choose to keep a single colour uniform but so many now standardise with camouflage gear for anything other than parade wear. Indeed, some is coloured in a distinctive way so as not to hide the wearer, but to make them stand out, to be immediately recognisable. A complex but absolutely fascinating subject and this one covers countries from all corners of the globe. I have no hesitation in recommending this if you want a first class reference on camouflage uniforms used around the world since WW2.

The defining reference book on modern camouflage patterns. Beautifully photographed and with expansive descriptions, it is well worth getting it on your shelf.

Eric H. Larson has been a leading researcher and collector of military camouflage for more than thirty years. He created one of the very first internet forums devoted to discussion of camouflage designs and military combat uniforms, the International Camouflage Uniform Society (ICUS), which brought together collectors, researchers, curators, and historians from around the world. In 2010, he co-founded the Camopedia website (with friend and fellow researcher/collector Henrik Clausen), which is a living document and the only comprehensive, academically-supported database of military camouflage patterns known to exist.

Eric has served as a primary consultant for published research projects, and has been cited in many military reference works, histories, artistic works, blogs, forums, personal websites and even role-playing game supplements. In addition to a passion for camouflage, he is also a collector and researcher of international airborne and special operations insignia, head dress, and unit histories. His interests include history, linguistics, classical literature, music, woodworking and the preservation of traditional indigenous cultures. Eric lives a quiet life in the Pacific Northwest, sharing space with native flora, fauna and local waters.