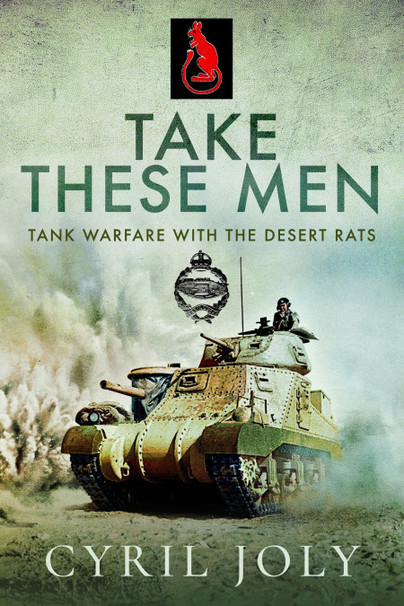 Tank Warfare with the Desert Rats

Add to Basket
Add to Wishlist
You'll be £14.99 closer to your next £10.00 credit when you purchase Take These Men. What's this?
+£4.50 UK Delivery or free UK delivery if order is over £35
(click here for international delivery rates)

Few accounts of the tank battles in the Western Desert during the Second World War have provided so vivid an evocation as Cyril Joly’s classic account Take These Men. In such inhospitable conditions, this was armoured warfare of a particularly difficult and dangerous kind.

From 1940 to 1943 battles raged back and forth as one side or the other gained the upper hand, only to lose it again. Often the obsolescent British armour was outnumbered by the Italians or outgunned by Rommel’s Afrika Korps, and frequently it suffered from the ineptitudes of higher command.

Cyril Joly’s first-hand narrative of these campaigns, highly praised when it was originally published in 1955, tells the story through the eyes of a young officer in the 7th Armoured Division, the famous Desert Rats. It describes in accurate, graphic detail the experience of tank warfare over seventy years ago, recalling the fortitude of the tank crews and their courage in the face of sometimes overwhelming odds.

A surprising account of desert warfare by a young officer. Although largely a work of fiction, It is a gripping read and highly recommended bringing events of the time to life in it own way.

Nicely broken into 6 parts marking events from 1940 to 1943. It’s a touching, and in places amusing account of tank warfare in a rough environment.

This really took me by surprise as a book. I had been expecting a bit of a Boys-Own style tale of exaggerated or fictitious daring-do. What I found was a fantastic account of the physical and mental stresses of a tanker during the brutal fighting in North Africa in WW2.
Absent is the hype often associated with anything 'Rommel' connected and instead, Joly goes into often touching details about the relationship and bonds formed and broken between the crews. In this story, there is a wealth of detail of the minutia of everyday lives for the tanker with the ever-vital brew to keep the spirits up and the mind fresh.
Right from the start I was both amused and saddened in equal measure by Joly's storytelling fighting the Germans and Italians in the desert, the terrible heat, flies, and the ever-present risk of death and injury. Joly's account, whilst being touching and funny at times serves to illustrate well the hardships of the terrain and conditions.

It was widely acclaimed on its initial publication in 1955. Although written in the fictional form, the book provides a brilliant account of tank warfare and the experiences of soldiers in the Western Desert battles.

‘Take These Men’ is a classic that is highly recommended for the young soldiers, sailors and airmen of today. Many politicians, advisors, academics, historians, scientists and information technology professionals would benefit from reading this book. In our troubled times we should remember Pericles’s funeral oration – freedom truly belongs to those who have the courage to defend it.

A vivid and flowing account of the North Africa armoured engagements by the late Lt Col Cyril Joly, MC & Bar. This book was highly acclaimed in 1955 when it was first published and remains the outstanding account from a ‘tanker’ who served throughout the Western Desert campaign, was wounded and awarded the Military Cross and Bar – Very Highly Recommended

I have photographs of two of my uncles serving during the second world war in Egypt, and I wonder if their regiments are referred to in this wonderful book. I now have no way of knowing their military background, this will have to wait until I can afford to check the Ancestry website for their details, but in the meantime I can read about the exploits of the Desert Rats knowing that those uncles, both now long dead, may have served with them. A fascinating account of the Desert Rats'exploits.

I found this book to be very thought provoking, reading how two of the writers friends were killed and how this affected the rest of the men, and the way that things could change at the drop of a hat, is very hard to comprehend. I would think that when this was first published in 1955 that it was still very raw in the minds of those that had taken part in these most horrifying of campaigns. This book shows the resilience of those men who were ready to sacrifice themselves for King and country. Although Cyril Joly died in 2000, but we should continue to read and record these stories, as very soon they will be lost to history as they leave living memory.

Lieutenant Colonel Cyril Joly was born in southern China and educated at Clifton College and the Royal Military Academy Sandhurst. He joined the Royal Tank Regiment in 1939 and served throughout the Western Desert campaign during which he was wounded and awarded the Military Cross and bar. He also wrote Silent Night: The Defeat of NATO. He died in 2000.