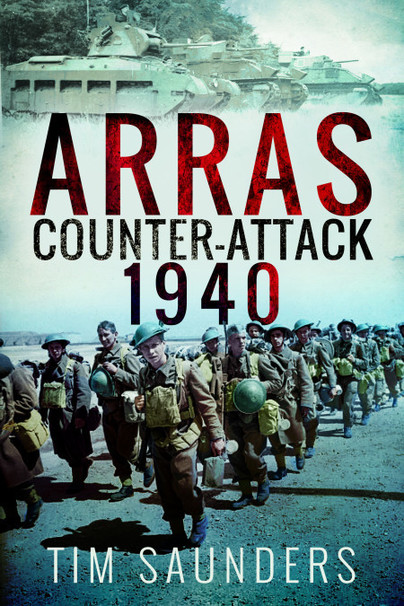 Add to Basket
Add to Wishlist
You'll be £12.99 closer to your next £10.00 credit when you purchase Arras Counter-Attack 1940. What's this?
+£4.50 UK Delivery or free UK delivery if order is over £35
(click here for international delivery rates)

On 21 May 1940 during the ill-fated Dunkirk Campaign the British launched an operation spearheaded by two tank regiments to help secure the city of Arras. This was the only significant armoured operation mounted by the British during the campaign.

Poorly coordinated and starting badly the Matilda tanks ran into the flanks of Rommel’s over extended 7th Panzer Division. With the German anti-tank guns, unable to penetrate the armour of the British tanks, Rommel’s infantry fell into chaos as the Matildas plunged deep into their flank. The Germans were machine-gunned and started to surrender in large numbers but with the British infantry lagging well behind, fighting their own battles in the villages, there was no one to round them up.

Into this scene of chaos entered Rommel whose personal leadership and example started to steady his troops and organise an effective response, despite being spattered with the brains of his aide de camp. This was classic Rommel but in the aftermath, he claimed to have been attacked by five divisions.

The Arras counter-attack contributed to Hitler issuing the famous ‘halt order’ to his panzers that arguably did much to allow the British Army to withdraw to Dunkirk and escape total destruction.

As featured on Recollections of WWII

Article: 'Author writes on German victory' as featured by

What is really interesting, amidst the detail of what happened, are the large number of personal accounts that are included throughout the book, all adding 'life' to the story, along with the archive photos and maps which illustrate the whole book. At the end of the book it includes a detailed Battlefield Tour, with navigation information and detail of what to look for, and where. Everything is then rounded off with 4 Appendices: First Army Tank Brigade Operation Order No6: The 7th Panzer Division Order of Battle: Analysis of the Operation: and The 'Arras Counter Attack' and the Halt Order.

In recent years that has been much published on the Arras area thanks to the WW1 centenary, and this gives a useful reminder that important events in WW2 occurred in the same area. With so much to see from both conflicts, the region has lots to offer the Battlefield visitor, and it is an easy car journey from the UK thanks to the Channel Tunnel. A very readable book as well as a good tour guide from Tim Saunders.

Arras Counter-Attack: 1940 is a valuable resource for those who appreciate an immersive experience of military history. If, like me, you have never had to face actual combat, you may find that this book offers a well-researched and supported window into the experience. If you have experienced war first-hand, you will probably recognize much in the stories of these soldiers from decades ago. Either way, Mr. Saunders has produced an excellent one-volume visit to France, 1940.

In this book, the author carefully breaks down the different parts of the battle and makes excellent use of maps. The result is a very readable account of the background and the battle itself. The book is also profusely illustrated with all the early war equipment that most readers will be less familiar with.

This book provides an excellent account, weaving together first-hand accounts with an overview – massively helped by an abundance of clearly marked maps. The prose is clear, engaging and exciting; the structure straightforward and the narrative clear.

A well-researched and written account of this action, and one recommended to anyone with an interest in the campaign of May 1940 in France and Belgium.

Overall I'd definitely recommend this to those with an interest in the period.

When the author first looked at this event writing it up in any coherent fashion must have seemed a daunting task. In making sense, for the reader, of chaos and confusion he has succeeded brilliantly. All through the book there many first-hand accounts and a large number of maps and photographs. The final chapter is an up to the minute guide to the battlefield.
I thoroughly enjoyed this book and recommend it highly.

The Arras counter-attack contributed to Hitler issuing the famous 'halt order' to his panzers that arguably did much to allow the British Army to withdraw to Dunkirk and escape total destruction.

This well researched work based on British and German military records, describes the fluid nature of the battle and General Rommel's decision to send his Panzers columns racing across northern France to seize the Channel ports. The loss of German panzers in a poorly coordinated counter-attack by British Matilda tanks and French armour, together with furious resistance from British infantry, was sufficient to persuaded Hitler to halt Rommel's panzers. This halt bought the Royal Navy a few extra days to evacuate thousands British and French soldiers from the crowded Dunkirk beaches.

This is the largely untold story of how two British tank regiments counter-attacked the invading Germans, helped secure the evacuation
of more than 300,000 British and French troops from the Beaches of Dunkirk and made such an impression on Rommel that he thought he was being attacked by five Divisions . - Most Highly Recommended

An excellent description of the Arras counter attack by an expert in the subject. It offers a very readable narrative of the situation that prevailed during the German offensive in 1940 and ties it in to an excellent description of the battlefield context. As would be expected from the author, the book ends with a good set of instructions on visiting the battlefield and offers details on where to stand to take in the impact of the geography on battle. It is a shame that access to Ferme du Belloy is no longer possible as it offered an exceptional insight into Rommel’s actions to direct fire from the ridge. I look forward to visiting the alternative location offered by the author.
Overall a very good read which sets clear some of the assumptions that get repeated in less authoritative accounts.