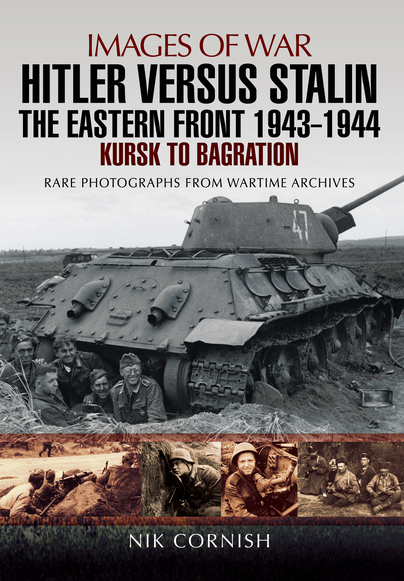 Click here for help on how to download our eBooks
Add to Basket
Add to Wishlist
You'll be £4.99 closer to your next £10.00 credit when you purchase Hitler versus Stalin: The Eastern Front 1943 - 1944. What's this?
Need a currency converter? Check XE.com for live rates

The third volume in Nik Cornishs photographic history of the Second World War on the Eastern Front records in vivid visual detail the sequence of Red Army offensives that pushed the Wehrmacht back across Russia after the failure of Operation Citadel, the German attack at Kursk. Previously unpublished images show the epic scale of the build-up to the Kursk battle and the enormous cost in terms of lives and material of the battle itself. They also show that the military initiative was now firmly in Soviet hands, for the balance of power on the Eastern Front had shifted and the Germans were on the defensive and in retreat. Subsequent chapters chronicle the hard-fought and bloody German withdrawal across western Russia and the Ukraine, recording the Red Armys liberation of occupied Soviet territory, the recovery of key cities like Orel, Kharkov and Kiev, the raising of the siege of Leningrad and the advance to the borders of the Baltic states. Not only do the photographs track the sequence of events on the ground, they also show the equipment and weapons used by both sides, the living conditions experienced by the troops, the actions of the Soviet partisans, the fight against the Finns in the north, the massive logistical organization behind the front lines, and the devastation the war left in its wake.

As expected from the "Images of War" series, this story is told with a concise narrative and a carefully selected array of quality photographs, each with detailed captions, illustrating a very broad range of equipment, uniforms and situations. These include civilian labour, partisan groups, evidence of the German scorched earth policy, defensive works, winter camouflage, and naturally, as they constituted the primary weapon on this front, a considerable number of armoured vehicles of all types.

A “boots on the ground” account provides valuable visual information to figure modelers as photos show a variety of uniforms and combats units.

Often times, a single photograph can capture the essence of a historical moment better than any amount of text - no matter how well-written it may be. I wholeheartedly recommend this book to any WW2 book collector who wishes to expand his collection of rare photographs pertaining to the eastern front. As aforementioned, this book is particularly more valuable as it reveals the less discussed aspects of the war such as partisan warfare, civilian participation and living conditions of both German and Russian soldiers.

A new addition to the very popular Images of War Series. This volume provides a graphic picture of the campaign that marked the beginning of the end for Germany. As with other volumes in this series, its great strength is the quality and rarity of the images that illustrate to concise text, all at a very aggressive cover price – Highly Recommended.

The pictures are very sharp and clear. The book will be of great interest to military historians and modelers alike. Lots of diorama ideas come to mind looking at the pictures.

This book tells the story of that Kursk battle, illustrates the material cost of that battle, and then the start of the Russian counter offensives back to the Soviet borders, and the fight that would eventually culminate in the Battle for Berlin.