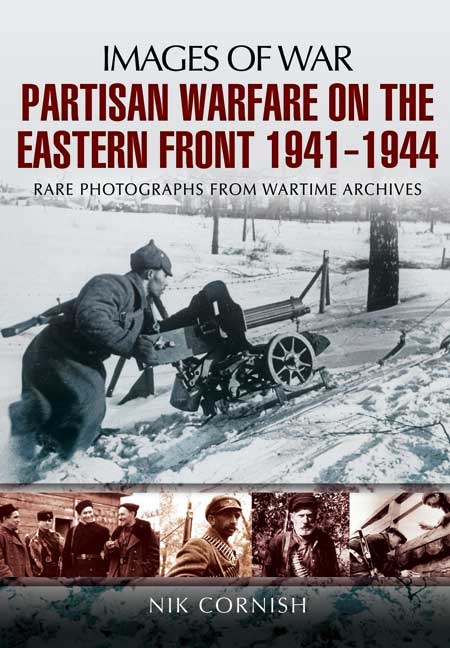 Between 1941 and 1944, in the war on the Eastern Front, Soviet partisans fought a ruthless underground campaign behind the German lines. During those three terrible years of occupation they spied on the Germans, disrupted their communications, sabotaged road and rail routes and carried out assassinations and raids, and thousands of these irregular soldiers lost their lives. Yet their exploits are frequently overlooked in general histories of the conflict, and their experience of the war and their contribution to the Soviet victory are rarely recognized.

That is why Nik Cornish's collection of photographs of the Soviet partisans is a landmark in the field. In a sequence of over 150 images, most of them previously unpublished, he gives a fascinating all-round portrait of the lives of the partisans and their struggle to resist and survive in a war that was waged with almost unparalleled cruelty on both sides. And, in his commentary, he outlines the history of the partisans - their desperate, chaotic beginnings in the wake of the German attack, their increasing coordination, daring and effectiveness as the war went on, and the key role they played as the Germans were forced back. He also records, through the photographs, the merciless counter-measures taken by the Germans and the reprisals.

His book gives a compelling insight into one of the most important side shows of the Second World War.

“Uses around 150 images of the Soviet Partisans to provide an insight into this rarely seen secret warfare, waged against the Germans between 1941 and 1944.”
“Offers a comprehensive account of the war behind the lines, looking at the personalities and the campaigns, revealing the horrors of the war and the effects of the campaign that saw the defeat of the Germans.”
“Provides a compelling insight into one of the most important side-shows of WW2.”

Between 1941 and 1944, in the war on the Eastern front, Soviet partisans fought a ruthless campaign behind the German lines. Yet their exploits are are frequently overlooked in general histories of the conflict.