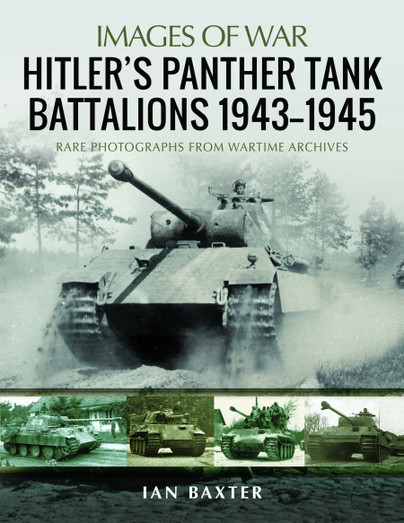 From July 1943 to the Nazis’ final defeat in May 1945 the Panther main battle tank and its variants were the mainstay of Germany’s armoured forces. This superbly engineered fighting vehicle offered a lethal combination of firepower, mobility and protection.

As this classic Images of War series title reveals, the Panther saw non-stop fighting on the Eastern, Western and Italian fronts. Using rare and often unpublished contemporary photographs with full captions and authoritative text, it provides a comprehensive coverage of elite Panther battalions in action.

The book traces the development of the Panther, for example into tank hunter (Panzerjäger), and also covers the other supporting vehicles that formed part of the Panther battalions’ establishment. These included armoured recovery, Bergepanther, halftracks, Sd.kfz.2 Kettenrad, gun tractors and communications vehicles.

The Mk V Panther was designed to become Germany's front line panzer of choice during the final years of the Second World War, complementing the more formidable yet expensive and less numerous Tiger, and despite issues of mechanical reliability is regarded as one of the finest tanks of its day, being very well armoured and capable of knocking out any Allied opponent. The carefully selected photographs in this book and their detailed captions document the development of the Panther from its 1943 debut at the Battle of Kursk and its subsequent use in Italy, through to the Normandy battles and the final days of the war. The large and high quality images show it in a variety of camouflages and situations, and they also depict its variants, including the impressive Jagdpanther tank destroyer. The book closes with appendices detailing the Panther's specifications and the composition of typical panzer, panzergrenadier and reconnaissance battalions in 1943 and 1944.

... For modellers and enthusiasts with a pre-existing knowledge of the Panther tank this is a really useful collection of images under one cover ...

All of this is amply illustrated with period black and white photographs. Mostly of Panthers, as you'd expect, but also occasionally of other vehicles that were found in Panther units, like Pz IV, half-tracks and numerous other vehicles, from cars and trucks to armoured cars. Many of the pics will be familiar to grizzled armour buffs, but many aren't.

All in all a solid entry in this series. Well worth having.


A Question of Scale

He describes the actions and organization of the Panther units in a straightforward and readable text and his captions for the abundant photographs add considerably to their value. As for the photographs, they are a nicely balanced selection of Panthers in various situations across the theatres, along with their supporting vehicles – Panther modelers will not be short of inspiration. All in all, this is a solid addition to the Images of War series and a good read for German armour buffs.

This offering from Pen and Sword as part of the Images of War series is another great release and covers one of the tanks that has a huge following; the Panther tank. The author has done a good job of presenting these images in a manner that helps the viewer find what they are looking for and so get the most from what is offered. An aspect that I like is that the photographs present different aspects of the Panther and its crews which appealed to me greatly.

... the photos will be the real interest to modelers and dioramists.

This is a great book for modelers (excellent photos), and those interested in a synopsis of the development and implementation of the Panther tank.

The information and photographs are thorough, leading to a very interesting specialist publication.

This book will be of great interest to armor modelers and armor historians alike.

It makes for not only another superb addition to the series, but is one that I know enthusiasts and modelers will use for references.

This is another beautiful book that joins the immense collection of the "Images of War" series, a series of the highest level with very clear photos and certainly of interest to historians and modelers.

This particular book in the Images of War series has around two hundred black and white photographs that follow the Panther Tanks and their development, I would say it is predominantly photographs obviously, with maybe slightly less supporting information about the events and campaigns. Which is perfectly fine as much of these books must overlap a bit, put the text and information is still excellent and very well written. The author Ian Baxter, is a well-known and much published author who is an excellent writer. In fact from reading these Images of War books, my knowledge and interest in tank warfare has come on greatly. I know thoroughly enjoy a good book about tanks. This book is excellent with first class photographs and the specifications section near the back is great. Definitely a 4.5 star read and highly recommended.

As ever with this series, we are offered concise narrative that allows the images to convey the real story. A good presentation that features the technical elements of this formidable tank, as well as interesting images of operations predominantly on the Eastern Front.