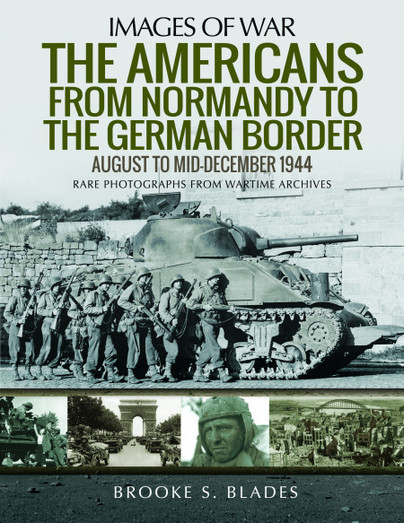 The Americans from Normandy to the German Border (ePub)

As seen in The Sun, July 2019: 'Haunting pictures of Allied troops' bloody warpath to Berlin are revealed in new book'

You'll be £4.99 closer to your next £10.00 credit when you purchase The Americans from Normandy to the German Border. What's this?
Need a currency converter? Check XE.com for live rates

This classic Images of War book takes up the story of the massive American contribution to the campaign in north West Europe during the autumn and early winter of 1944.

Following the dramatic breakout from the Normandy bridgehead, events moved fast with the liberation of Paris quickly following and the Allies closed in on the German border.

But the apparent collapse of the Nazis was illusory. As lines of communication lengthened and German resistance stiffened, the Allied High Command was divided on the right strategy. The ill-fated Operation Market Garden brought home the reality that the war would continue into 1945. The Siegfried Line was penetrated and Aachen fell but the American First Army suffered heavy casualties in the Hurtgen Forest. As winter set in, the third Army crossed the Moselle River and into the Saar. The stage was set for the costliest battle in American history – the Bulge, to be covered in the Third and final volume of this trilogy.

With his superb collection of images and grasp of the historic significance of the actions so graphically described, Brooke Blades’ latest book will be appreciated by all with an interest in the final stages of the Second World War.

This book will appeal to historians and anyone interested in better understanding this momentous period in history. Model makers will find much to inspire dioramas. But the most significant aspect of this book is how the pictures and text capture the mood of these tempestuous times. Highly recommended.

This title as part of the Images at War series is another great title in the line up due to the way the author has tackled the subject matter. The text is well written and clear which provides the reader with a good degree of information covering the background plus who and where. The photographs are a very good mix of images which are lifted greatly by very well written captions that accompany each and every one of them. The Allies never seem to get the coverage that the German forces got and this title goes a long way in helping to address that aspect.

The image archive is spectacular and clarifying in many cases.

The latest in Pen and Sword's invaluable and fascinating Images of War series shows the Americans in North West Europe. It's always been said that a picture paints a thousand words, and there are in all probability millions of words behind the exclusive and compelling collection of photographs in this stunning book.

Another in the marvelous 'Images of War' series

There are some fantastic images on view here, some well-known; and the book really cracks along at a fair old pace.

Mr Blades offers a balanced look across the Allied effort because this was coalition warfare in Eisenhower’s image and this serves to deepen the context of what we are looking at.

There is a strong mix of images that fit together nicely and the history is handled in an accomplished manner. You cannot go very wrong with books like this one.

This really is a first class book which has been well researched and is beautifully written. The last of the books in this trilogy covers the Battle of the Bulge, the crossing of the main rivers in western Germany and the advance to Berlin. I certainly look forward to another fine publication!

This book encapsulates the reasons why the Images of War is as successful as it is. Incisive and informative commentary underpinned with carefully selected photographs. This book, along with its fellow Images of War counterparts could either be read as a standalone quick read for the curious or as a foundation for further readings in this field.

So to sum up, Pen & Sword have given us another excellent resource as modelers to inspire and motivate new ideas for vignettes and dioramas. It was difficult to choose from just a few images from the 250 in the book– all are quite amazing and very few are common ones you would see opening any WWII history book. It is a valuable addition to the bookshelf for any history buff of the Allied actions in the ETO and on the modeling desk for those shiny new Shermans coming out from Meng and others…or even just to dust off one from the stash and build with a renewed vigor. Well done Dr. Blades!

The archive images are well chosen and this is another good Images of War title, so the final part of the trilogy is one to look forward to.

The second of three books, following the Americans from Normandy to the Ardennes, covering the period from the break-out of the beachhead in August 1944 to early December. At just over 200 pages, this is one of the larger entries in the Images of War series, and chronicles their progress across the entire front with a superb collection of high quality photographs, each accompanied by detailed notes, and vividly showing the intensity of the fighting with a number of truly excellent images of American troops in action. The chapters single out several key engagements for particular attention, including the Falaise Pocket, the liberation of Paris, the difficult fighting to breach the Siegfried Line around Aachen, and the subsequently bloody Battle of Hürtgen Forest. Although a predominantly British operation, it also extensively covers Operation Market Garden and the brilliant actions of the 82nd and 101st Airborne Divisions.

A book that combines beautiful and meaningful photos with an accurate and exciting narration. Another book that cannot be missed in the shelves of history buffs of the Second World War.

FOLLOWING their heroics at the Normandy Landings, a stunning new book captures the fierce resistance the Allied Forces came up against whilst pushing the Nazis out of France.

Following their heroics at the Normandy Landings, a series of haunting images have captured the fierce resistance the Allied Forces faced as they attempted to push the Nazis out of France.