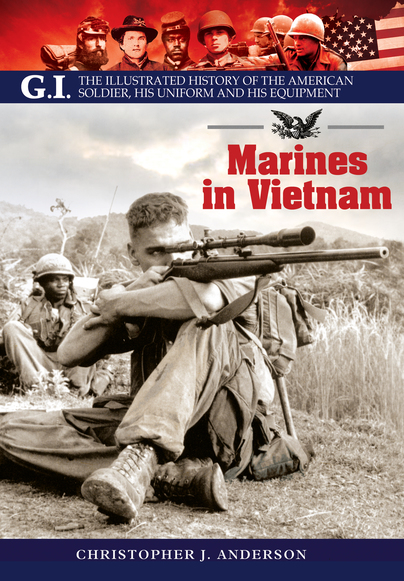 Add to Basket
Add to Wishlist
You'll be £12.99 closer to your next £10.00 credit when you purchase Marines in Vietnam. What's this?
+£4.50 UK Delivery or free UK delivery if order is over £35
(click here for international delivery rates)

On the morning of 8 March 1965, the men of the United States Marine Corps prepared to land on Red Beach II in the Republic of Vietnam. The resulting conflict became the most protracted war of the Corps' history. The Marines evolved through early, nervous attempts to fend off the North Vietnamese enemy, to 'hearts and minds' programmes with the local population, and the larger operations Hastings and Dewey Canyon, where fighting resembled some of the worst in the Pacific arena of World War II. As the last Marines were evacuated by Communist-overrun Saigon in 1975, the countless battles, skirmishes and 'hill fights' had seen the Marines account for a third of all U.S. casualties in Vietnam. More than 100 rare and unusual photographs document the uniforms, insignia and equipment of the USMC, including the M14 rifle (later replaced by the M16); grenades, mines and flamethrowers; body armour flak jackets, helmets, camouflage and jungle boots; and transports such as the LVTP-5, Sea Knight and Chinook.

Every photograph is supported by a generous caption which adds further weight to the content, considering its size. A large number of the images are unpublished, reproduction is excellent and the majority are crisp and filled with detail.

Highly recommended to figure modellers and a particularly useful reference for a diorama or two.

The book contains 104 photographs in black and white and 17 colour with an image resolution that's very good despite being very old photos.

The photographs are superb, many of them unpublished and in a variety of situations that range from the everyday to the fiercest fighting.

This title is ideal for modellers and support for good historical recreation.

A source of inspiration for the modeller and an invaluable aid to the military historian of this era.

Christopher Anderson has done an excellent job in avoiding the politics of the Vietnam conflict and the involvement of the US Marines.
Concentrating on the great number of changes in weapons, webbing and uniforms and supported by a fine collection of period photographs, many of which are seen for the first time. This book would make a fine addition to Marine historians, collectors or veterans alike.

Essentially, these are photo-essays, but they also include highly informative concise text and extended photo captions. The quality of the images is first rate and the selection of images matches, Some images are rare or never before published in publicly accessible documents This book covers US Marines during the Vietnam war. Strongly recommended.

Most images are in monochrome, but there are also some very good full colour images. The reproduction and presentation is of high quality, in a very affordable book.

Among the many black and white images, all with useful captions, there are details of uniforms, both official and in some cases unofficial, being worn with the experience of combat, along with the effort and sometime strain clearly visible on the faces of men in sometimes fraught situations. There is also a good variety of equipment to be seen. I've already mentioned the early use of the UH-34 helicopter and there is also the Ontos, the M48 and the 105mm M102, a gun which would have been equally familiar to the GIs of WW2 and Korea. As for small arms, the M16 and the M60 machine gun feature a lot, but there are others such as sniper rifles and the M79 grenade launcher all in use.

The photos cover the story from the early stages of the war at the start, moving through to the final stages of the end of US involvement in the war, when helicopter flew out of South Vietnam to US ships and so many that they simply had to be pushed off the decks into the sea to make space for more to land.

Some excellent detail for modellers and lots to illustrate the story for those just interested in the history of the Vietnam conflict. It is also good in my view that older series of books such as these are made available again after all these years