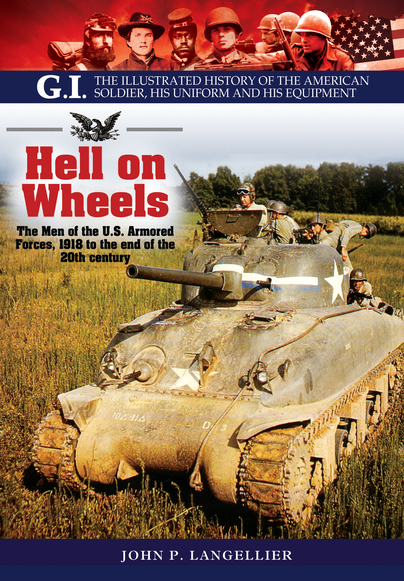 Add to Basket
Add to Wishlist
You'll be £12.99 closer to your next £10.00 credit when you purchase Hell on Wheels. What's this?
+£4.50 UK Delivery or free UK delivery if order is over £35
(click here for international delivery rates)

This valuable addition to the G.I. series is an illustrated guide to America’s armoured forces from the use of prototypes tanks sputtering their way forward in 1918, to the complex technology of Operation Desert Storm. With detailed commentary by John P. Longellier, this book demonstrates just why these lethal troops were known as ‘Hell on Wheels’.

This is an excellent book for anyone interested in US Armoured Forces of all eras. Military model makers will appreciate the numerous close up photographs of uniforms and equipment and there are a number of photographs that will serve to inspire diorama builders. Highly recommended for military model makers interested in US Forces who are looking for pictures of US tank crews and their equipment.

Hell on Wheels follows the evolution of the main American tanks, but it is more focused on the men and their varying uniforms and headgear. It seems that American tank crews have always improvised their uniforms as much as they have personalized their tanks, making for many interesting photographs.
Military modellers will certainly draw inspiration, and the Bolt Action types will enjoy the variety of details they can add to their Shermans, M3s etc.

This book contains 92 photographs in black and white and 15 in colour, with an image resolution that's very good despite being very old photos. Many of them are unpublished and show a variety of situations.

This is a source of inspiration for the vehicle modellers in particular, as well as for figures and general scenarios. It is also an invaluable aid for the military historian of this era.

The quality of the images is first rate and the selection of images matches, Some images are rare or never before published in publicly accessible documents This book covers story of the men of the US Armored Forces from 1918 to the end of the 20th Century. Strongly recommended.

Among the many black and white images, all with useful captions, there are details of uniforms, both official and in some cases unofficial, being worn with the experience of combat, along with the effort and sometime strain clearly visible on the faces of men in sometimes fraught situations. There is also a good variety of equipment to be seen.

Some of the photos have been seen elsewhere but many are new to the book and there is plenty of inspiration for modellers not only with specific details, but also with some handy ideas for dioramas to display your finished models. It makes a good addition to this series, with the aim of covering the wider history of the US soldier over the years.