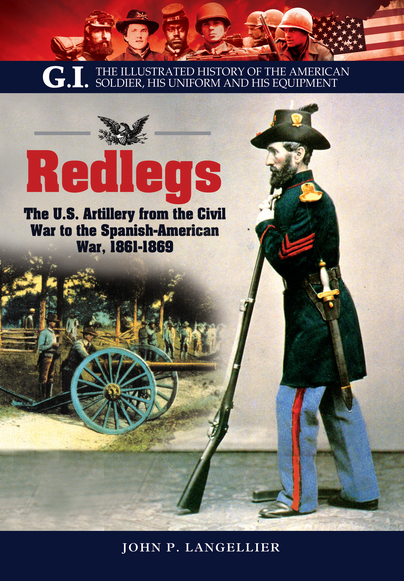 Click here for help on how to download our eBooks
Add to Basket
Add to Wishlist
You'll be £4.99 closer to your next £10.00 credit when you purchase Redlegs. What's this?
Need a currency converter? Check XE.com for live rates

This volume in the popular G.I. series illustrates a much-neglected aspect of American military history – the U.S. Army artillerymen, named redlegs after the red stripes on their trousers. The photographs, most of them rarely seen in other sources, range from the Civil War and the campaigns against the American Indians through to the Spanish-American War.

Artillery was a vital arm and proved its worth in all of these diverse theatres of war; artillerymen served as part of mobile columns, in sieges and blockades, and as garrisons in remote frontier forts. This handy guide includes superb images and descriptive captions detailing the appearance of the men, their uniforms and equipment, and the ordnance used over the years.

The collection of black and white photos are magnificent. Uniforms, equipment, armament, everything and with very good quality despite being very old. A curious and interesting book with a priceless visual of information.

The term 'red legs' referred to the stripes on the trousers of America's gunners. This book covers the Civil War, the wars against three Indians and culminate with the Spanish-American War in Cuba. It contains an eclectic mixture or photographs, graphic plates and original historical artefacts which illustrate the history of this branch of the US Army.

As the blurb rightly suggests some of these illustrations appear to be quite rare and give an interesting insight into how the uniforms and personal equipment of this branch of the U.S. Army developed.

...In short this is an interesting book that covers its subject matter well. Its appeal, like most of Pen & Sword’s titles, will be to a specialist audience, who like me have an interest in this period of history and/or military uniforms of the time.

JOHN P. LANGELLIER is the author of several publications on the life and times of the U.S. soldier includingBilly Yank: The Uniform of the Union Army, 18611865 andTerrible Swift Sword: Union Artillery, Cavalry and Infantry, 18611865.