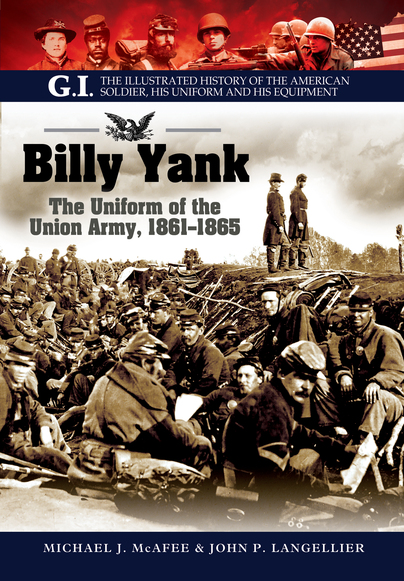 Add to Basket
You'll be £12.99 closer to your next £10.00 credit when you purchase Billy Yank. What's this?
+£4 UK Delivery or free UK delivery if order is over £30
(click here for international delivery rates)

Billy Yank or Billy Yankee was the name given to the Union soldiers of the North during the American Civil War: and a famous and enduring symbol of the period.

Typically Billy Yank is presented dressed in regulation blue uniform topped with a forage hat, the standard headdress used by the military of the period. This handy guide delves a little deeper and sets out to discover exactly what the typical 'Billy Yank' looked like and how they lived. Compiled by two experts on the subject of military uniforms of the period, and crammed with fascinating facts and images, this is an excellent glimpse into the life and times of the union soldier and a valuable addition to the popular G.I. series.

The collection of black and white photos are impressive showing uniforms, equipment, weaponry and everything else with very good quality despite being very old.
It is a uniform visual documentation of luxury.

This is part of the G.I., the Illustrated History of the American Soldier, His Uniform and His Equipment, Series. As with other books in this series, it features a large number of rare and unusual photographs and sketches. In this volume, the photographs are all monochrome, but drawings/sketches are executed in full colour. There is also a page with Division and Corps badges in colour. Essential reading for American Civil War enthusiasts and a valuable view of one period of US Army history.

There is text in the form of introduction, and in captions and extended captions, but this is primarily a visual exposure of the Union Army during the American Civil War. The images are of high quality and provide considerable visual information.

An affordable volume to build a comprehensive visual record of American soldiers and their equipment.

JOHN P. LANGELLIER is the author of several publications on the life and times of the U.S. soldier includingBilly Yank: The Uniform of the Union Army, 18611865 andTerrible Swift Sword: Union Artillery, Cavalry and Infantry, 18611865.