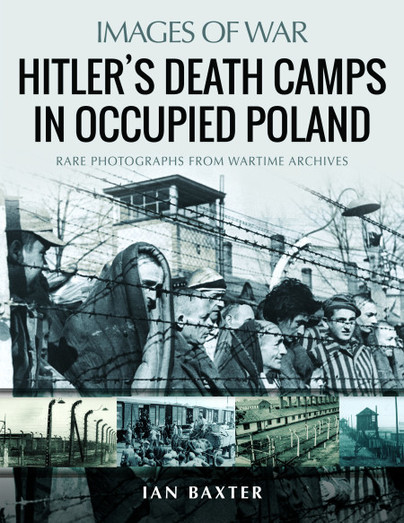 As featured in the Daily Mail, January 2021: 'The Auschwitz arrivals unaware of their fate'

You'll be £11.99 closer to your next £10.00 credit when you purchase Hitler’s Death Camps in Occupied Poland. What's this?
+£4.50 UK Delivery or free UK delivery if order is over £35
(click here for international delivery rates)

Nearly 80 years on, the concept and scale of the Nazis’ genocide programme remains an indelible, nay almost unbelievable, stain on the human race. Yet it was a dreadful reality of which, as this graphic book demonstrates, all too much proof exists.

Between 1941 and 1945 an estimated three and a half million Jews and an unknown number of others, including Soviet POWs and gypsies, perished in six camps built in Poland; Auschwitz-Birkenau, Belzec, Chelmno, Majdenak, Sobibor and Treblinka.

Unpleasant as it may be, it does no harm for present generations to be reminded of man’s inhumanity to man, if only to ensure such atrocities will never be repeated.

This book aims to do just this by tracing the history of the so called Final Solution and the building and operation of the Operation Reinhard camps built for the sole purpose of mass murder and genocide.