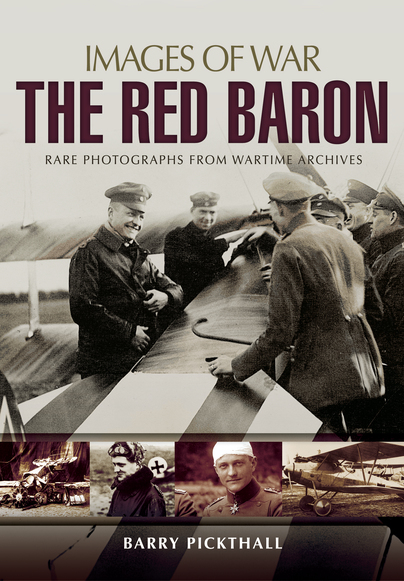 Beginning his wartime career on the Western Front in August 1916, Manfred von Richthofen, or the Red Baron as he became known, had shot down an impressive total of fifteen aircraft by January 1917, as well as being appointed commander of his own unit. By the time of his death in 1918, he had destroyed a staggering total of eighty allied aircraft. From the perspective of the allies, he was a deadly menace. For the Germans, he was a fighter pilot hero of legendary significance. This fascinating collection of rare images offers a fresh perspective on the Baron himself, as well as a number of his adversaries from the Allied side of the line.

Found by chance at a car boot sale by the author, an esteemed journalist and keen amateur aviator, this collection has sat, mostly unused, for almost a century. Until now. This intriguing addition to the Images of War series is set to ignite new discussions about this most legendary of fighter aces as we approach the centenary of his death, and the ending of the First World War, in 2018.

After his early flights and subsequent first solo flight he moved to bombing in Russia and gaining experience before finally being given command of his own squadron. After already having gained a number of victories, command of his own squadron also led to him choosing to have his aircraft painted in overall red, so his enemies would know him. In addition to the pictures of Richthofen himself, there are pictures of his own and his units' various aircraft, along with others to illustrate the various types which became his victims. Following a section on Defending the Siegfried Line, and his liking of a silver cup to commemorate each of his individual victories, a routine he only stopped when the silver to make them became unavailable. Then we get to the story of his end. While for so long thought to have been killed by the Canadian pilot, Captain Roy Brown, an autopsy later revealed that the bullet which killed him came from a .303 rifle bullet, fired from the ground. He was buried with full honours, and his remains later moved to a war cemetery in Berlin. Photos included do show the remains of the Fokker Triplane in which he was finally shot down, and the interest in those remains for souvenirs by soldiers on the ground. An interesting addition to the history of this famous WW1 Ace.

Barry Pickthall is a winner of the Whyte & Mackay Journalist of the Year Award and a keen amateur aviator, having flown in Tiger Moths with a friend since his college days. A former sports correspondent for The Times and Sunday Times newspapers, he has authored 26 books and continues to write exclusively for magazines across Europe, USA, South Africa and Australasia. Barry is also Managing Director of PPL Photo Agency, and is an avid collector of historic pictures. It was whilst browsing through a box of prints at a local car boot sale that he stumbled across a large collection of negatives taken during the First World War. Once blown up, these images provided the content for this publication.