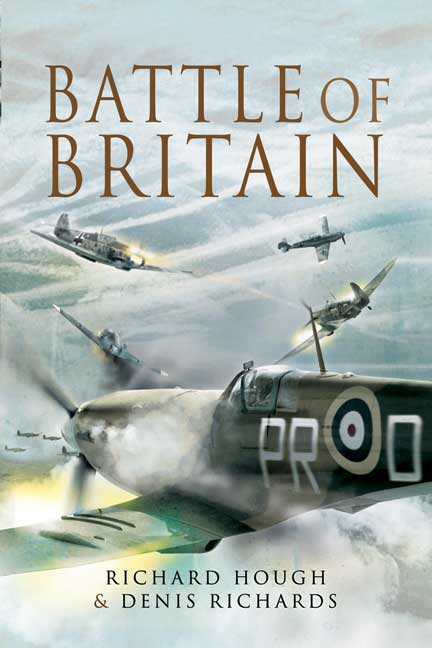 Add to Basket
Add to Wishlist
You'll be £16.99 closer to your next £10.00 credit when you purchase Battle of Britain. What's this?
+£4.50 UK Delivery or free UK delivery if order is over £35
(click here for international delivery rates)

Order within the next 2 hours, 34 minutes to get your order processed the next working day!

High above the warm, summer fields Churchill's 'few' fought with courage & skill against overwhelming odds - and won. A vivid account of the air battles as well as an explanation of how the campaign developed. Fresh insights into the controversies with the aid of original material as well as recollections of many of the surviving air crew & ground staff. Vividly illustrated with many photographs. Denis Richards, co-author of the official history of RAF operations in World War Two, and Richard Hough, the historian and biographer, have collaborated to write this magnificent new account for the general reader; as well as offering vivid descriptions of the air fighting. It explains with great authority how both sides developed their air forces in the inter-war years, a necessary prelude to a true understanding of the Battle itself. It provides fresh insights into the controversies of the time and makes use of original material derived from interviews and correspondence with over three hundred surviving air-crew and ground staff.

'Well researched, well written and thought-provoking treatise on the Battle of Britain...recommended to all those with an interest in the momentous events of this period.'

WWII: Victory for RAF in Battle of Britain

RAF Fighter Command is claiming victory over the Luftwaffe after a day of heavy bombing raids ended in big losses for the enemy. According to the RAF, 176 enemy aircraft were destroyed by fighter planes. At least another nine aircraft were hit by anti-aircraft guns. British casualties were much lighter - only 25 aircraft lost with 13 pilots killed or missing.