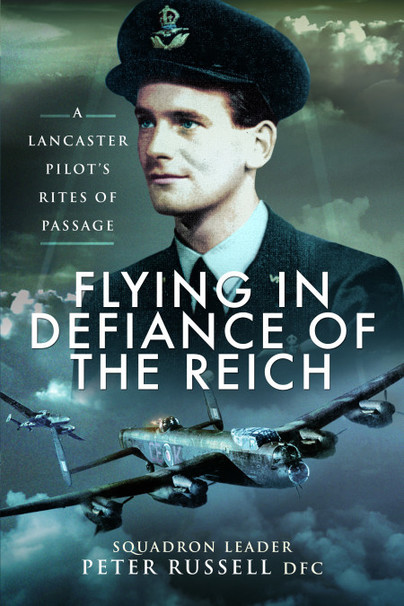 Flying in Defiance of the Reich (Paperback)

A Lancaster Pilot's Rites of Passage

Add to Basket
You'll be £11.99 closer to your next £10.00 credit when you purchase Flying in Defiance of the Reich. What's this?
+£4 UK Delivery or free UK delivery if order is over £30
(click here for international delivery rates)

This is the vivid memoir of a young man who served with both Coastal Command and Bomber Command throughout the Second World War. Having joined the RAFVR before the war, Peter Russell was mobilised in August 1939 and, after training, became operational with Coastal Command’s 233 Squadron flying Lockheed Hudsons from Leuchars, Aldergrove and St Eval in Britain’s battle for survival in the Atlantic.

After fourteen months Peter was rested and tasked with training navigators for the impending enlargement of Bomber Command. In 1944 he joined 625 Squadron flying Lancasters against targets in Germany and Occupied Europe. Russell took command of ‘B’ Flight and was promoted to squadron leader. His memories of the many raids, his crew and operational flying during this period until the end of the war are gripping recounted in Flying in Defiance of the Reich.

After the German surrender, Peter headed for the Far East, joining Shield Force which was tasked with conducting a strategic night bombing offensive against the Japanese mainland. However, before it could become operational the war was brought to an abrupt conclusion with the dropping of the atomic bombs on Hiroshima and Nagasaki. Peter’s unit was, therefore, redirected to relieve Hong Kong, in which the RAF undertook a purely land operation. The final chapters give a unique insight into how Japanese military rule was replaced, once again, by British law and order.