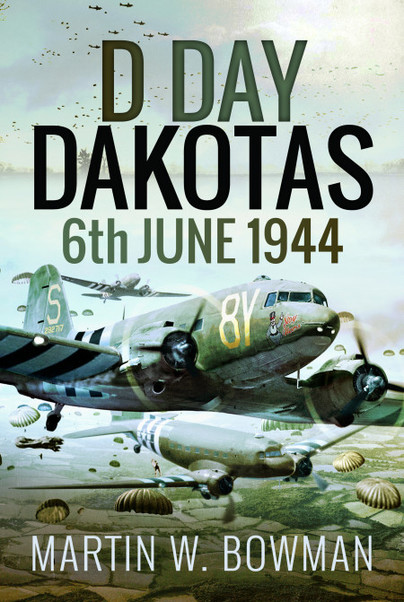 Click here for help on how to download our eBooks
Add to Basket
Add to Wishlist
You'll be £4.99 closer to your next £10.00 credit when you purchase D-Day Dakotas. What's this?
Need a currency converter? Check XE.com for live rates

On 18 December 1935 when the first flight of the Douglas DC-3 took place, few could have imagined that it would become one of the world’s most celebrated aircraft of all time, not just as a commercial airliner but also as the C-47 military transport. When production ceased in the summer of 1945, a total of 10,926 had been built.

This wonderfully versatile aircraft played a significant part in airborne operations around the world; but perhaps its most notable employment occurred during the June 1944 Normandy campaign. This important episode within the wider history of ‘D-Day' is enlivened here in classic fashion by Martin Bowman, in a narrative that features both extensive historical notes as well as deeply personal accounts of endurance and individual gallantry.

This amplified account of events as they unfolded in the skies above France on D-Day (5/6 and 6/7 June, 1944) reveals the invaluable contribution these workhorses of World War II made to the overall success in Normandy. It follows the author’s comprehensive five part work published by Pen & Sword (Air War D-Day) that included a multitude of personal military accounts from both Allied and German personnel who took part in Operation ‘Overlord’ and the Normandy campaign.

This book contains unbelievably many stories about this and explains even extra the role of these hero’s, who, despite enormous losses still have had a big role in this invasion, which in later publications isn’t properly mentioned. The book is a great tribute to the heroes of that day and of course the Dakota!

The Airfix Dakota kits, in its various incarnations, has always been a favourite. This beautiful aircraft has been a workhorse for many years and there are still some in civil service now and there’is always a Dakota at most air shows.

In WWII it really came into its own and Martin Bowman has superbly documented it’s role, in fantastic detail.

This book is highly recommended, and I would suggest getting this book and an Airfix kit together. Reading this book will bring a new dimension to your creativity and appreciation of one of the best aircrafts to ever be built.

The text is written in English but the readers of Shakespeare’s language should enjoy this piece of History from the Dak’s point of view.

From a leading aviation author, an excellent account of the contribution made by the iconic DC-3/Dakota/C-47 to the success of D-Day. This versatile transport aircraft was one of a handful of truly iconic aircraft to serve in WWII – Most Highly Recommended

The book goes into the most amazing details of both the pilots lives and work, and the bases that sprang up to house this vast fleet. Also losses during training are recounted, and then losses during the final run ins, many, sadly, due to lack of self sealing fuel tanks.

This large book of over 300 pages, and with lots of original pictures is a must read to any one interested in both the Dakota and the airborne troops that served with them, a real tribute to that workhorse of the sky and the brave men that flew in them, the book is just as much about the Airborne troops as it is about the good old Gooney Bird and her crews.

So many personal stories are contained her that to relate any one would spoil the book for you.

Buy it! you will not be disappointed.

An impressive and detailed study of one of the most iconic of all aircraft, the Douglas Dakota. I had an Airfix model of the Dakota in the 1950s, and it was one of my favourites. Martin Bowman traces the history of this remarkable aircraft as it became one of the first commercial airliners following its extensive use in WW2. Brilliant.

This book is an informative piece, with many personal accounts of events as they happened before and during the D-Day operation. There is a section in the book that covers events at Greenham Common, I was fascinated because to me Greenham Common was where many women later camped and protested because of the nuclear missiles that were stationed there. If you like the other books written by Martin Bowman then this is definitely a book for your collection.

This volume is both well-researched and written.

D-Day Dakotas’ is a highly detailed account of the use of Dakotas in the US Airborne drops on 6th June. Some superb accounts adding a new level to our understanding of the Night Drop. Highly recommended.