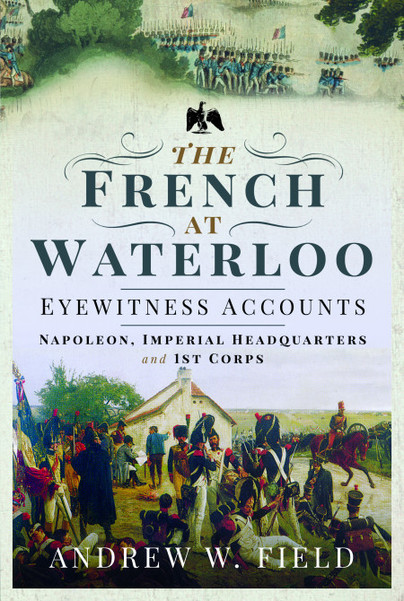 Add to Basket
Add to Wishlist
You'll be £19.99 closer to your next £10.00 credit when you purchase The French at Waterloo: Eyewitness Accounts. What's this?
+£4.50 UK Delivery or free UK delivery if order is over £35
(click here for international delivery rates)

Andrew Field, who has published four best-selling books on the Battle of Waterloo, has established himself as one of the leading experts on the French perspective of the campaign. Using selected extracts from French eyewitness accounts that haven't been published before in English, he has added a new dimension to our understanding of what happened on the battlefield on 18 June 1815. Now he takes his pioneering work a step further by publishing these accounts, with all their vivid and personal detail, in full.

For the first time readers will be in a position to make their own interpretations of them and compare them to the recollections of soldiers from the allied armies, in particular the British, which have largely determined our assumptions about the battle for the last 200 years. They will also gain a heightened insight into the trauma that the French eyewitnesses went through as they tried to explain how the French lost a battle they claim they had been on the point of winning.

This, the first of two volumes of the French accounts, features Napoleon's own description of the battle, those of his immediate household and the Imperial headquarters, and those of members of 1st Corps. Napoleon’s own version of events, one of the first to be published in France, was used as the basis of many subsequent histories that ignore or gloss over his many dubious claims. His account of his actions and his view of what happened on that decisive day, and those of his close associates, make fascinating reading.

A worthwhile read for anyone with an interest in the Napoleonic wars or the soldier's eye view of combat...

An excellent and fascinating collection. Essential reading for the Napoleonic/Waterloo enthusiast.

It seems he’s found his niche because his latest book is a collection of carefully curated, translated, eye-witness accounts by Napoleon, his headquarters staff, Marshal Ney, and the soldiers of 1 Corps.

I would recommend this book to anybody with an interest in Waterloo or the Napoleonic era.

Whilst the eye witness accounts are direct translations and thus affected by the style of the time, the authors own text is easy to read and follow. His summaries of each eyewitness is concise and relevant.

The book has few maps but a good collection of plates with good explanatory text.

A nice well laid out book as you would expect from Pen and Sword.

Article: 'Waterloo book by Westbury author' as featured by

Sources are the backbone of history without which we are stumbling around in the darkness, searching for answers that cannot be found. They must be handled with care, however, and for such a cataclysmic event like Waterloo we need an expert guide. Field certainly fits that description for The French at Waterloo. He welcomes his readers into the debate over how Waterloo is interpreted, allowing them to work with the sources and come to their own conclusions. For a book like this, you cannot ask for anything more. I am looking forward to the second volume in this series with great anticipation. 10/10.

This book, taken as a whole, is fascinating. Each of the twenty-eight eyewitness accounts is engaging and intriguing and the introduction offers wise guidance for any would be military historian. There are three accounts from Napoleon himself progressively ‘adjusted’ as time passed to cast himself in a better light and to place the blame for defeat on other shoulders. To a certain degree one would expect accounts from different sides of the battle to differ but these accounts are all from the same side and one wonders, in some cases, if they were in the same battle. A number of accounts have Hougoumont and La Hay Sainte both falling while others confuse the two. Somewhere in the midst of this confusion of first hand accounts lies the truth.
The text is support by a few photographs and a map of the disposition of French troops at the start of the battle. Also, before each account, there is a very useful potted biography of the writer and the source of the document.
A most enjoyable read which we highly recommend.

The author, Andrew Field, has written an immensely interesting book compiling and editing eye witness accounts of the Battle of Waterloo- from the French perspective. The amount of research that the author has undertaken is astonishing and needs to be highly commended.
The first part of the book describes his editing and selection process, deciding what sections of various French memoirs should be included and the reasons behind his thought processes. Field wanted to avoid hearsay accounts of individuals that were not actually present at the point of the various skirmishes.
Clearly the defeated Generals tried to blame others for the British victory, also to make their part in the battle more heroic and well-executed than it really was. Napolean's account, in particular, was somewhat self-aggrandising and didn't closely align with the true events of the battle, or that of his Generals.
I loved the author's introductions to each of the eyewitnesses, giving details of their individual careers, battles, and their respective lives after Waterloo. From a military perspective, I am impressed that many of the senior officers were rapidly promoted through the ranks following their impressive exploits on various European battlefields.
The accounts of the more junior ranks are a lot more reliable, honest, and gritty than those of the senior officers. Particularly startling were the descriptions of what it was like to physically participate in one of Napolean's powerful Old-Guard columns being raked by canister, cannon balls, musket fire and subjected to mass British cavalry attacks.
I have read many books on Waterloo, but all from the British perspective. It was refreshing and fascinating to read about the French participant's experiences during the battle and the subsequent rout.

This is an excellent combination of personal accounts, many of which may be little known. As well as the short accounts by Napoleon and their derivative accounts that seek to explain the overview of the battle, there are several accounts from those who had a limited horizon. However, these are the real gems that are unaffected by those seeking to establish reputation or blame. The account by Private Louis Canler of his experience in 28th Line Regiment during the ill-fated advance of D’Erlon’s I Corps on the British Left is stunning. Struck by canister, shot and musket ball the column kept advancing and filling the gaps left by the fallen until the British Cavalry fell on them to complete the destruction. That alone is worth buying this book. The common theme is that defeat was totally unexpected as to French eyes it seemed that the battle was going well. Recommended.