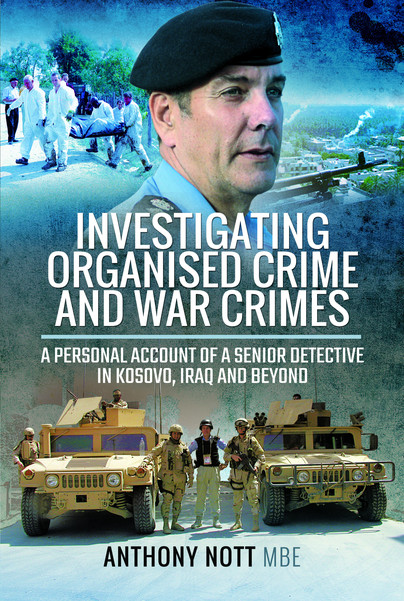 A Personal Account of a Senior Detective in Kosovo, Iraq and Beyond

Picks of the Year!

Listed in the Law Society Gazette's 'Picks of the Year' feature

You'll be £4.99 closer to your next £10.00 credit when you purchase Investigating Organised Crime and War Crimes. What's this?
Need a currency converter? Check XE.com for live rates

Tony Nott retired from the Dorset Police in 2002 at the rank of superintendent. He had spent most of his service as a detective, and had been involved in the investigation of a number of murder cases and other serious crimes.

In 2000 he led the British forensic team on exhumations in Kosovo and describes the horror and brutality carried out by Serb paramilitaries. He then worked in Bosnia for the UN, where he was the commander of the eighty-strong UK police contingent. He describes in detail the investigation of human trafficking for the sex trade and illustrates some conflicting rivalries between the UN and the European Union police mission.

He served a year in Iraq between 2004 and 2005 and gives insights into the Shia takeover of the police and other institutions; plus, some unsettling accounts of human rights abuses. He was involved in the investigation into the murder of British aid worker, Margaret Hassan, and is deeply critical about the role played by the UK government. He describes the difficulties he had in dealing with some senior members of the Iraqi Police; in particular, the refusal of a Deputy Minister of Interior, who declined to reopen an investigation into the murder of a British security contractor and four Iraqi citizens. The killers were suspected to be the local police.

He then went onto serve two years in Israel and Palestine, where he worked with a US-led team to reform the Palestinian security services in cooperation with a European effort.

Whilst this book covers the worst of human behaviour, it also highlights the bravery and triumph of the human spirit, by those ordinary people who were caught up in these events.


I recommend this book to anybody keen on the recent history of the areas in question, also to those interested in international policing and cooperation at such level and to writers who want to research this period and are considering setting their books in that era. A great insight into international policing in zones of conflict provided by a true-life hero.

Investigating Organised Crime and War Crimes is a great book and certainly worth a read. The Iraq section on it’s own elevates it above similar tomes .

Tony's memoirs are both depressing and inspiring; depressing because of the violence inflicted on innocent people, often of the same religion, but of a different sect as the criminals, inspiring because of the wholehearted willingness of most of the local police and the overseas army and police officers to work together to resolve problems, despite any past differences.

Besides all the merits of first-person autobiography - giving us, the reader, a ringside seat - Nott has an important story to tell, and he puts across well and movingly the pain and rewards of doing such work.