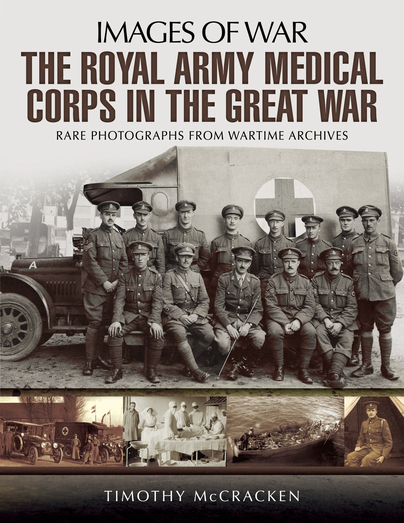 The Royal Army Medical Corps in the Great War (ePub)

Click here for help on how to download our eBooks
Add to Basket
Add to Wishlist
You'll be £4.99 closer to your next £10.00 credit when you purchase The Royal Army Medical Corps in the Great War. What's this?
Need a currency converter? Check XE.com for live rates


The size of the armies, the intensity of the combat, the power of modern weaponry and the global nature of conflict meant the number of casualties proved challenging for the medical services of all combatants, including the RAMC.


A range of previously unpublished photographs, in thematic chapters considering aspects such as service in the United Kingdom, global warfare and commemoration, illustrate experiences of RAMC and medical personnel during the First World War.


The book contributes to wider understanding of the RAMC and medical services in the First World War, and will be of relevance to readers with an interest in medical, social and photographic history.

When reading books on the medical aspects of the First World War one tends to see the same
collections of photographs used repeatedly, but what McCracken sets out to do is to focus more on
the individuals of the medical services. This he does by using an extensive collection of previously
unpublished group photographs of medical units, postcards and images of individuals.
Although the title suggests the book is about the Royal Army Medical Corps (RAMC), the author has
also included members of the military nursing services and the voluntary organisations, such as the
ladies of the Voluntary Aid Detachments. The book is divided into chapters covering the United
Kingdom, France and Belgium, and under Global War, the other theatres of conflict where the
medical services found themselves providing care.

This is not just a collection of war images; many of them are accompanied by extensive captions
explaining who the individual was, where he served and other career details. This makes the
photographs all the more personal and helps bring the characters to life. Many of the photographs
show the lighter side of life at war such as unit sports teams, some of the illustrations include
sketches taken from unit magazines and journals, and there are postcards sent home to families.
This book achieves its aim of focusing on the individual more than the general side of the medical
services at war, and it does that admirably but, as such, you will not find photographs of the RAMC
tending wounded in the front line. It shows the reader that the men of the RAMC who went out into
No Man’s Land and rescued the wounded under fire, earning an enormous number of gallantry
awards doing so, were not supermen but just normal human beings thrust into a war to bring
succour to the sick and wounded.

The Royal Army Medical Corps in the Great War is highly recommended for those interested in the
military medical services.

As well as producing a fascinating narrative, Timothy carried out extensive research to source many photographs, some previously unpublished.

All the photographs are so revealing and give a great insight into the contrasts of struggles and strains and then glimpses of happiness of service life for the RAMC and QAs. I would thoroughly recommend Timothy's excellent book to anyone with an interest in the Great War or of the history of the medical corps or the nursing service.

Yet another excellent addition to a very popular series that presents outstanding images of war. Unfairly dubbed ‘Rob All My Comrades’ by soldiers in the trenches, the RAMC introduced a very professional field medical service that saved huge numbers of lives from battle injuries and epidemics during WWI – Very Highly Recommended.

Timothy McCracken's latest book is confirmation of his skill in bringing to life what otherwise might have been an academic study. He accomplishes this in a number of ways, mostly by the extensive use of a range of previously unpublished photographs.

The author deserves the credit of making the men and women serving in the RAMC visible...
"Images Of War" shows the faces behind the abbreviation RAMC - that is the meaning of this book.

This is very much a story of the people, those who made up the medical services which supported the British and Commonwealth soldiers wherever in the world they served during WW1.