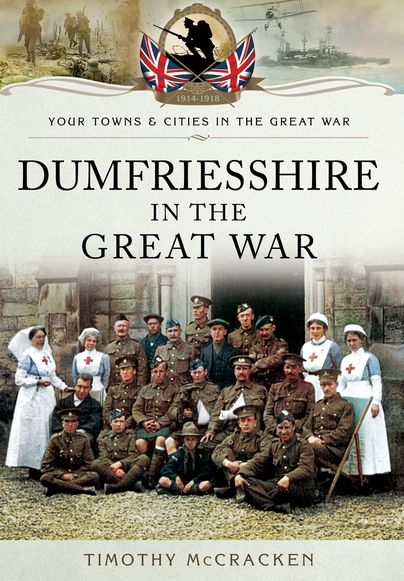 Dumfriesshire in the Great War (ePub)

Click here for help on how to download our eBooks
Add to Basket
Add to Wishlist
You'll be £4.99 closer to your next £10.00 credit when you purchase Dumfriesshire in the Great War. What's this?
Need a currency converter? Check XE.com for live rates

In Dumfriesshire, the most striking change during the Great War was to occur around Gretna. Here the largest cordite factory in the UK was established, work commencing on the factory in 1915, with completion in 1916.

Throughout the region the impact of the First World War was felt greatly by the local communities, which were decimated by the losses suffered during the conflict. The huge influx of workers to H.M. Factory Gretna disrupted areas of daily life and caused an increase in crime. The population of Dumfriesshire supported those who directly suffered as a result of the war, in a number of ways, including the production of wound dressings, the provision of auxiliary hospitals and fundraising efforts to provide support to refugees.

The book contributes to wider understanding of the impact of the First World War, particularly in rural areas, and as such will be of relevance to readers with an interest in cultural and social history.

Dumfriesshire in the Great War is a great example of the magnificent work being carried out in rural areas of the Home Front and this volume will be of great interest to those with an interest in military nursing.

Dumfriesshire in the Great War explores the local dimension of the events which turned the established social structures and certainties upside down. The design and dedication of war memorials throughout the area and in the aftermath of the conflict is covered in words and pictures. Well illustrated throughout.

An intriguing new book which is packed with photographs of yesteryear. A definitive account of the impact of villages, as well as towns like Dumfries and Annan. It also shows how the war helped shape the region 100 years ago. As well as the huge loss of life, the book also records the arrival of many refugees in the region and the amazing fundraising efforts that went on, along with caring for the wounded, dealing with prisoners of war and how many buildings were given a new use during wartime.

Explores the local dimension of the events which turned the established social structures and certainties upside down. The author also describes the story of HM Factory Gretna, the cross-border cordite - explosive propellant - manufacturing complex, which brought into the area many thousands of workers, most women, from around the UK and what is now the Commonwealth. 'Dumfriesshire in the Great War' is well-illustrated throughout, including many pictures from the period.

'Dumfriesshire in the Great War' explores various themes and contributes to a wider understanding of the impact of the war, particularly in rural areas, and will be of relevance to readers with an interest in cultural and social history.