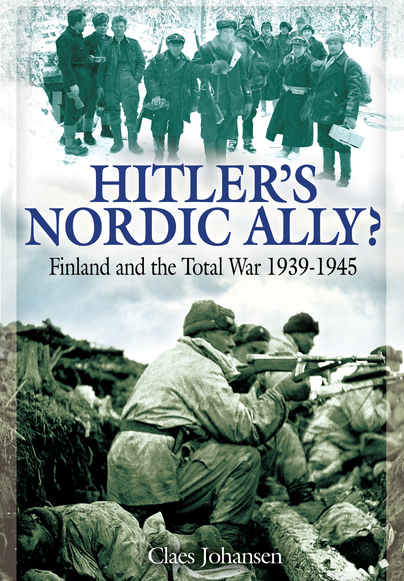 Add to Basket
Add to Wishlist
You'll be £25.00 closer to your next £10.00 credit when you purchase Hitler’s Nordic Ally?. What's this?
+£4.50 UK Delivery or free UK delivery if order is over £35
(click here for international delivery rates)

Finland was the only nation with an elected and democratic government to fight on the German side in WWII. Despite being small, poorly armed and made up of conscripts, the Finnish army was probably the most effective fighting force at the time, managing with practically no outside help to keep the mighty Red Army at bay for more than three months during the Winter War of 1939-40.

In 1944, the devastating Soviet mass attack against the Finnish army involved the largest artillery assault of the entire WWII theatre of operations up until this point. Nevertheless, the Finns eventually managed to halt the attack.

Most English books on Finland in WWII concentrate on the brief Winter War and make very little mention of the country’s involvement in the remainder of the war, where it fought for more than three years alongside the Germans against the Soviet Union, and later against Germany in the Lapland War.

This book examines this extremely important, highly dramatic and often overlooked and misunderstood chapter of WWII to a broad, English-reading audience. Building on the latest historical research, Claes Johansen’s ground-breaking work explains how the Finnish war effort was planned and executed, how it was connected to the overall events of the era, and how the waging of a total war can affect a modern democratic society militarily, politically, diplomatically and on various levels of civilian life.

This is an excellent history of this difficult period in Finnish history, one that is still controversial in Finland. Johansen has covered a wider than normal range of topics, giving us a much more comprehensive view of these two wars and their political context.

The author superbly relates this entire amazing combat saga with informative text plus an outstanding photo selection in a work that you won't want to miss!

Claes Johansen has given us as thorough and as considered an overview of Finland’s experience in World War II as any student of the subject could want. Johansen is an author who has written many books, both fiction and non-fiction and in both Danish and English. Until now I have mainly known him for his books on the seminal English musical groups of the 1960s, Procol Harum and the Zombies. Clearly, they were merely the tip of the literary iceberg. War has been a particular focus of his writing, and Hitler’s Nordic Ally?: Finland and the Total War 1939-45 is an English language account that follows Johansen’s Finland og den totale krig published in Danish in 2013.

While I have no doubt that serious scholars will find this 310-page tome (plus appendices and index) quite useful, it is entirely accessible and readable for those of us who are mere history buffs or who simply want to know more about an extremely interesting time and place in recent history. Many of us—especially Americans, such as myself, born after the war—have always tended to see the Second World War as a single continuous conflict between two sides—with numerous participating countries arrayed on either one side or the other. By chronicling Finland’s experience during this period, Johansen brings home the fact that the experience of each individual country was not only particular to that country but that not every nation self-identified as either a member of the Axis or as a teammate of the Allies. Smaller countries like Finland were mainly striving to survive with their independent nationhood intact. Finland, we learn, did not so much participate in what we think of as World War II as fight three separate and successive wars while other wars were raging simultaneously in Europe and in the Pacific.

Johansen lays out Finland’s complicated story by dividing it clearly into four distinct sections, corresponding to each of the three different Finnish wars and to the 15-month Interim Peace between the first two wars. The narrative alternates between detailed descriptions of the political debates and maneuverings that preceded and followed each of the wars and blow-by-blow accounts of the military actions that shifted the Finnish-Soviet border westward and then eastward and then westward again. The battle narratives are brought to life by generous excerpts from journals and first-hand accounts by participants on the ground and by many photographs of stunning quality from the war zones. The author highlights in particular the participation and accounts of his Danish countrymen—as well as other international volunteers from Norway, Sweden and the Baltic countries. Some photos—like that of a dead child being carried by a soldier or of the skeletal cadaver of a Russian prisoner of war—are terrible to see and serve to remind us how horrific things were for so many people in Europe—and during a period that was not that many years ago.

A preface helpfully sets the stage by setting out the intertwined history of Finland and the Soviet Union leading up to the Winter War. We learn that from 1809 to 1917 Finland was a grand duchy of Russia and that it gained its independence after a civil war that paralleled the one in Russia but which had a very different result. That set the stage for two decades of tensions as the Soviets worried about the security of their second largest city, Leningrad (the once and future Saint Petersburg), whose suburbs lay only 30 kilometers from the Finnish border. By the end of the book, we are appreciative of the near-miraculous fact that Finland avoided being absorbed into the Soviet Union like nearby Estonia, Latvia and Lithuania. At the back of the book are six pages of maps to help the reader situate the various battle zones and the shifting border, but avid perusers not familiar with the geography may want their own detailed map at hand to glance at frequently during their reading.

What comes through clearly in Johansen’s telling is his deep admiration for the Finnish people (if not always for each and every one of their political and military leaders) and their determination to survive as an independent people. (The author clarifies at the outset that, while Finland is not a Scandinavian country, it is a Nordic one.) In an introduction he asserts that the “Finnish Army was probably the most effective fighting force in all of the Second World War. Despite being made up of conscripts, small and poorly armed, it managed with practically no outside help to keep the mighty Red Army at bay for more than three months during the Winter War of 1939-40.” For all that, his tone is generally detached and non-judgmental and he leaves no stone unturned in examining every angle of the choices made by Finnish leaders when it came to cooperating with Nazi Germany in its war against the Soviets.

His ambivalence about judging probably explains why the title ends with a question mark. It would be fair for readers to wonder why the question mark is actually there. After all, as an unoccupied country that coordinated with Berlin in advance of Operation Barbarossa (the Axis invasion the Soviet Union), Finland surely qualified as a German ally—even if Finland was never a formal member of the Axis. Yet, as Johansen is at pains to demonstrate, as non-Aryans (in the Nazi world view) the Finns were operating out of practicality and were not invested in Hitler’s ideology. Finland during this period just may be one of the best examples we have of the old expression: the enemy of my enemy is my friend. And while the Winter War and the Continuation War were both fought against the Soviets, the seven-month Lapland War of 1944-45, which followed an armistice with the Soviets, was fought against the Germans. Having said that, however, we do learn that there was a current in Finnish society that aspired to a Greater Finland which would encompass the adjacent Soviet territory of East Karelia and possibly even parts of the Baltic countries, so things are never completely black and white. In the end, the Finns’ motivations and actions were complex and not always morally comfortable and, in fact, War-Responsibility Trials were held in the post-war period in an attempt to sort out some measure of accountability.

Of all the complexities and seeming paradoxes that come to light in exploring Finland’s history, probably the biggest conundrum is the one highlighted by Johansen at the very outset in his introduction: “Finland was the only nation with an elected and democratic government to fight on the German side in the Second World War.” As the author makes clear, this was largely out of necessity. The Finns would have gladly accepted support and aid from the Allies, but it was never going to be forthcoming. At every turn the Finns were thwarted by other countries caught up in their own uncomfortable necessities and their own shifting allegiances.

As is no doubt amply clear by this point, I can highly recommend the book to anyone with even the slightest interest in the topic.

Born in Copenhagen in 1957, Claes Johansen is the author of 35 published books, many of them historical novels. He completed his national service in the Danish army in 1977 and later qualified as teacher. Since 1992 he has been working full-time as a bilingual writer in English and Danish.