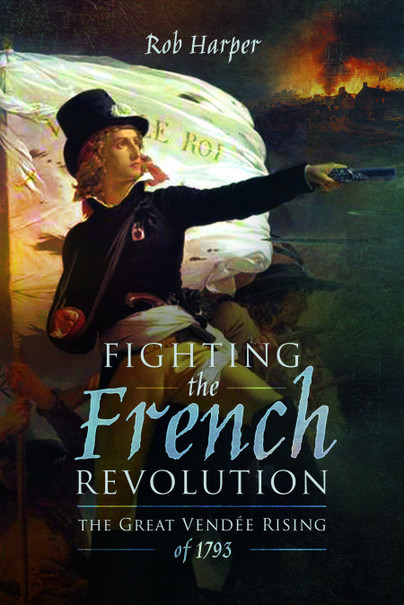 The Great Vendée Rising of 1793

Click here for help on how to download our eBooks
Add to Basket
Add to Wishlist
You'll be £4.99 closer to your next £10.00 credit when you purchase Fighting the French Revolution. What's this?
Need a currency converter? Check XE.com for live rates

In 1793 France was facing foreign invasion along its borders and a fierce political war was raging in Paris when a large-scale revolt, centred on the western Department of the Vendée, suddenly erupted, almost bringing the new-born French Republic to its knees.

The immediate trigger for this Great War of the Vendée, barely known outside of France, was the attempted imposition of conscription but the region seethed at the erosion of its traditional values and way of life. The persecution of the Catholic Church and killing of the king symbolized to the Vendéens how dangerous the new Republic had become; in a matter of weeks tens of thousands had flocked to fight for the ‘Catholic and Royal’ cause.

This is the story of the new Republic’s ferocious military campaigns against the armies of the Vendée, which fiercely defied them between March and December 1793, tying down hundreds of thousands of troops desperately needed on the frontiers. Napoleon later called it ‘The War of Giants’ and it directly led to the implementation of some of the Republic’s most extreme laws.

... when measured by the goals the author sets for himself, the work is clearly a successful contribution to the existing literature, particularly for those readers limited to the English language.

Rob Harper’s book tells the fascinating story of one particular incident that occurred when the French revolution had more or less finished and the various factions were jockeying for position in the new Republic. Fascinating stuff.

Harper provides detailed accounts of just about every key engagement that occurred between Royalist and republican forces... They point to some solid research by Harper.

For those of us who tend to focus on the wars of Napoleonic France this book offers an interesting diversion into a conflict that was instrumental in forming some of the conditions that impacted the later conflicts in which France felt compelled to partake. As with all revolutions, the enemy within is as problematic as the enemy outside the borders. Indeed the enemy within can help focus and justify actions to stiffen the revolution. So it was with the Vendee Rising and this book has a well written narrative, good maps and supporting images. Enjoyable read.

Rob Harper has a degree in History and has worked for nearly thirty years as a specialist in the preservation of historic buildings. His particular passions are for the history of the French Revolutionary and Napoleonic eras and Early Modern military buildings, which happily coincide with his current work on major heritage projects in the Portsmouth Harbour area, a locale closely linked with the Napoleonic wars. His deep interest in the counter revolution was sparked by a visit to the Vendée over twenty years ago and he has devoted much of his spare time to researching it ever since. He has written numerous articles for heritage magazines and wargaming magazines. He lives in Fareham, Hampshire.