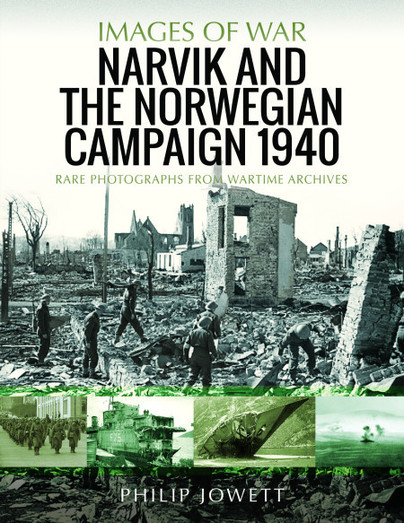 Narvik and the Norwegian Campaign 1940 (Paperback)

Add to Basket
Add to Wishlist
You'll be £18.99 closer to your next £10.00 credit when you purchase Narvik and the Norwegian Campaign 1940. What's this?
+£4.50 UK Delivery or free UK delivery if order is over £40
(click here for international delivery rates)

The Norwegian campaign, fought in 1940, early in the Second World War in Europe, is overshadowed by the campaign in Poland that preceded it and the German blitzkrieg in the Low Countries and France that followed, yet it was a close contest from the military point of view and it had a far-reaching impact on the rest of the war. Philip Jowett’s photographic history is a vivid introduction to it.

In a concise text and a selection of over 150 photographs he traces the entire course of the fighting in Norway on land, at sea and in the air. He describes how important it was for the Allies – the Norwegians, British and French – to defend northern Norway against the Germans, in particular to retain control of the strategic port of Narvik.

The book documents in fascinating detail the troops involved, the aircraft and the large naval forces, and gives an insight into the main episodes in the conflict including the struggle for Narvik and the major clashes at sea which culminated in the loss of the Royal Navy’s aircraft carrier Glorious.

The photographs are especially valuable in that they show the harsh conditions in which the fighting took place and offer us a direct impression of the experience of the men who were there.

"This book will be of interest to modelers and military historians alike."

As history proudly records, the Norwegians did indeed stay stubborn and strong, and this well-written and very interesting book presents both an illuminating background of the events leading to that resistance, and indeed an interesting parallel to current resistance in Ukraine.

With a large collection of archive images, most of which I hadn't seen before, this gives an excellent reference on ground, air and sea forces involved on both sides of this early part of the war, one which Germany won and disregarding the ideas of neutrality of both Denmark and Norway.

The book is split into 14 chapters from Defending Neutrality through Invasion, Fall of Denmark, Sea Battles, Airwar over Norway to the end of the Norwegian Invasion. I must admit I do enjoy reading about the Norwegian part of the war, purely as I said this part of the war gets very little attention. This was a good read and thoroughly enjoyable with a good number of excellent photos, an excellent addition to the series.

This offering from Pen and Sword is a very nice addition to the Images of War series, as it covers a period of the war in an area that is largely ignored. I appreciate the authors attempts to provide written introductions to the chapters, as it does help to add context into what you are going to look at. Something Philip Jowett does particularly well are the captions for the photographs, as the level of detail provided I found pleasing.