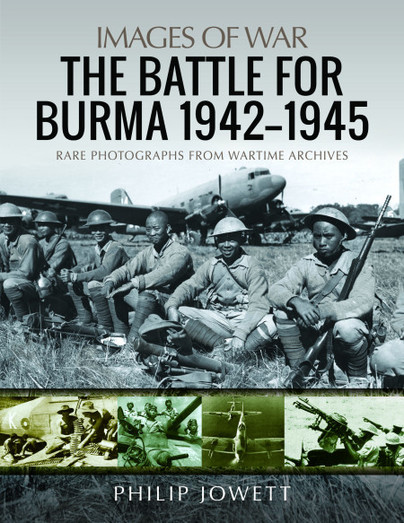 The battle for Burma during the Second World War was of vital importance to the Allies and the Japanese. The Allies fought to protect British India and force the Japanese out of Burma; the Japanese fought to defend the north-west flank of their newly conquered empire and aimed to strike at India where anti-British feeling was growing stronger. Yet the massive military efforts mounted by both sides during four years of war are often overshadowed by the campaigns in Europe, North Africa, the Pacific and China.

Philip Jowett, using over 200 wartime photographs, many of them not published before, retells the story of the war in Burma in vivid detail, illustrating each phase of the fighting and showing all the forces involved – British, American, Chinese, Indian, Burmese as well as Japanese. His book is a fascinating introduction to one of the most extreme, but least reported, struggles of the entire war.

The narrative and the striking photographs carry the reader through each of the major phases of the conflict, from the humiliation of the initial British defeat in 1942 and retreat into India and their faltering attempts to recover the initiative from 1943, to the famous Chindit raids behind Japanese lines, the Japanese offensive of 1944 and their disastrous retreat and ultimate defeat.

The Battle for Burma is thicker than the usual Images of War series books. That is mainly because of the numerous excellent photographs that accompany Jowett’s engaging text. A second unusual feature is the amount of combat photographs Jowett includes, which are mostly from the Allied side, as you might expect, but also some from the Japanese perspective. Jowett also highlights the roles of the Chinese Nationalists, Americans, Indians, East and West Africans, and native Burmese, illuminating the joint Commonwealth and Allied war effort that it took to defeat the dogged Japanese. As an avid reader of the Burma campaigns, I thoroughly enjoyed this book and learned a lot from it.

"...a great addition to the series and one that can be easily recommended."

As you will know as a regular reader of the Pen & Sword Books Images of War series, I think this series is fantastic in the job that it does in the retelling of history. I think the books in this series that cover the far east campaign of world war two are important in revealing the truth and what happened because sometimes all we seem to get is history about the european conflict, the far eastern sides often gets ignore or not seen as important. The events and history that went on in WW2 are just as important. Again in reading this book, I have to say the photographic images in the book are fantastic and this is accompanied by splendid written history by the author Philip Jowett. Another great book in a great series.

As a regular reader of military history books for over 50 years now, I for one feel that while I know a little about the war in Burma, I know much more about WW2 in Europe, North Africa, Eastern Europe and even the American Island Hopping campaign across the Pacific than I do about events in Burma, so I found this a particularly interesting book, plus some potential modelling ideas as well.

Another superb volume in Pen and Sword's Images of War series, this time about the Battle for Burma. Amazing photographs.

This offering from Pen and Sword as part of their Images of War book series, are visually the best reference I believe you can get for your money. It covers everything from the chaotic Allied retreat, through to the Japanese surrender, and as such this is a visual gem. When It comes to wanting to read about this region of conflict, you really need to look elsewhere. However, the captions provided and the introduction at the start of each chapter, does provide a great deal of information, that the images alone cannot convey. As a modeller, I strongly urge you purchase titles from this series that cover your areas of interest, and specifics as well.

The author has produced a magnificent book that helps to redress this modern-day literature deficiency and to remind the reader that this campaign should not still be in the “forgotten” category. It is an enjoyable book to read and highly informative. No doubt it will appeal to a wide readership and I am confident that those interested in the Far East campaign will absolutely love it. The collection of period photographs speaks for itself and the author has honoured the memory of those involved in this brutal campaign.