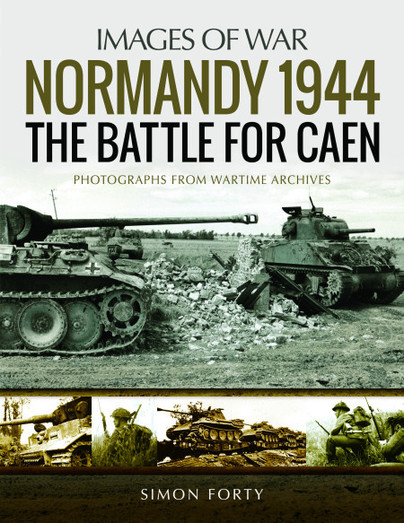 Click here for help on how to download our eBooks
Add to Basket
Add to Wishlist
You'll be £4.99 closer to your next £10.00 credit when you purchase Normandy 1944: The Battle for Caen. What's this?
Need a currency converter? Check XE.com for live rates

Caen, a D-Day objective on 6 June 1944, did not fall to the British and Canadian troops of Second Army until 6 August, by which time much of the city had been reduced to rubble. The two-month struggle was a crucial stage in the Normandy campaign and, as Simon Forty demonstrates in this photographic history, one of the most controversial.

His detailed, graphic account gives the reader a fascinating insight into the opposing forces, the conditions, the terrain, the equipment and weaponry deployed – and it illustrates just how intense and protracted the fighting was on the ground.

The reasons for the slow Allied advance have been hotly disputed. Deficiencies in British and Canadian equipment and tactics have been blamed, as has the tenacity of the German resistance. Ultimately a sequence of Allied operations sapped the defenders’ strength, and it is these operations – Perch, Martlet, Epsom, Windsor, Charnwood, Jupiter, Atlantic, Goodwood – that feature strongly in the striking photographs that have been selected for this book.

They record in the most dramatic fashion the character of the fighting and show how even the SS divisions and heavy tank battalions were eventually defeated.

A part of the "Images of War" series following the advance of the British 2nd Army beyond the D-Day beaches, and in particular the protracted and costly struggle for the control of Caen. It had over-optimisitcally been intended to fall on the first day, but this became impossible with the chance arrival of the 21st Panzer Division in its suburbs, and instead it was two months before the British finally passed through the ruins of this historic town. The photographs document the numerous offensives which the 2nd Army launched in the area, including Operations Perch, Martlet, Epsom, Windsor, Charnwood and Goodwood, and though these failed to achieve a decisive break through they nevertheless forced the Germans into a relentless and bloody attritional battle which they could only lose. As would be expected of this series the detailed photographs show a broad range of units and equipment with a heavy emphasis on armoured vehicles, and it includes a section dedicated to the famous action of Tiger ace Michael Wittmann and his severe mauling of the 22nd Armoured Brigade near Villers-Bocage.

Rarely have I read a book like this and felt I was actually there. One could almost smell the smoke and hear the guns. Forty's narrative style is compelling and leaves the reader wanting more.

A rating of five out of five is the best I can do.

It also provides a good illustration of one of the talking points of the Normandy campaign, the strengths and weaknesses of the armoured vehicles used by both sides. For someone new to studying the Normandy campaign I think this is excellent, and even those who have studied it will still find plenty to interest them. Modellers I think will like it especially for the visual references.