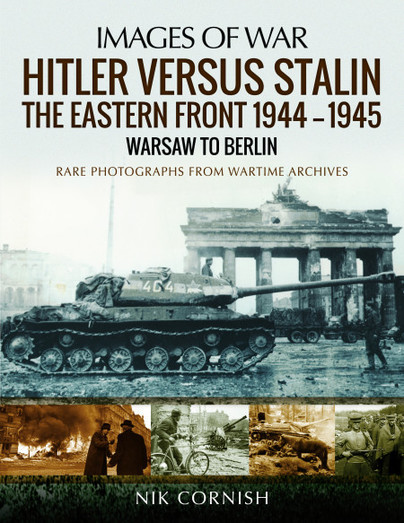 Click here for help on how to download our eBooks
Add to Basket
Add to Wishlist
You'll be £4.99 closer to your next £10.00 credit when you purchase Hitler versus Stalin: The Eastern Front 1944–1945: Warsaw to Berlin. What's this?
Need a currency converter? Check XE.com for live rates

In the fourth and final volume of Nik Cornish's photographic history of the Second World War on the Eastern Front the defeat of the German army, the destruction and occupation of the cities in eastern Germany and the humiliation of the German people are shown in over 150 mostly unpublished wartime photographs. The extent of the fighting, from the Baltic in the north to the Balkans in the south, is recorded in a selection of graphic images, as is the tenacity and desperation of the German resistance and the unstoppable force of the Red Army as offensive after offensive crushed the Third Reich. While most of the photographs show the Red Army, its troops, equipment and the conditions in which it fought, the shattered cities of Germany and eastern Europe and the suffering and destitution of the civilians are recorded in graphic detail.

The photos have a useful selection of subject matter, from river gunboats, armoured trains, bridging operations, entrenchments, city fighting, uniforms and equipment plus a good selection of armour and artillery of both sides. Historians and modellers should like this one for the references.