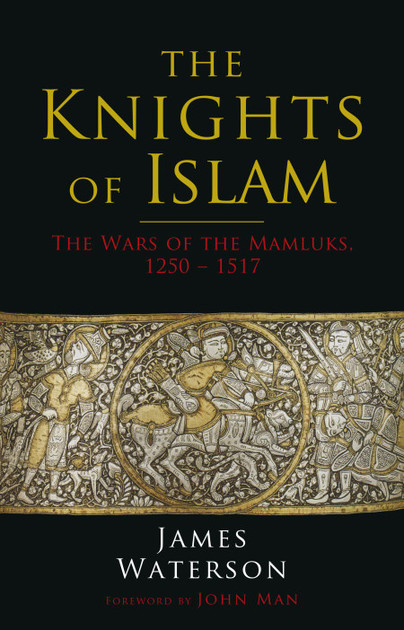 The Knights of Islam (Paperback)

Add to Basket
Add to Wishlist
You'll be £14.99 closer to your next £10.00 credit when you purchase The Knights of Islam. What's this?
+£4.50 UK Delivery or free UK delivery if order is over £40
(click here for international delivery rates)

‘The author brings together a wealth of information which has, until now, only been available in highly specialised academic journals and scholarly books’ – David Nicolle

'An astonishing array of themes and characters’ – John Man

The Mamluks were, at one distinct point in history, the greatest body of fighting men in the world and the quintessence of the mounted warrior – reaching near perfection in their skill with the bow, lance and sword.

Their story embraces many of the great themes of medieval military endeavour: the Crusaders and the deadly contest between Islam and Christendom, the Mongols and their vision of World Dominion, Tamerlane the Scourge of God and the rise of the Ottoman Empire whose own slave soldiers, the Janissaries, would be the Mamluks' final nemesis.

They entered the Islamic world as unlettered automatons and through a total application to the craft of the warrior they became more than soldiers. After a bloody seizure of power from their masters, the descendants of Saladin, they developed a martial code and an honour system based on barracks brotherhood, a sophisticated military society that harnessed the state's energies for total war and produced a series of treatises on cavalry tactics, martial training, mounted archery and scientific and analytical approaches to warfare that more than compare to Sun Tzu's Art of War, the Western Codes of Chivalry and the Bushido in their complexity, beauty of language and comprehensive coverage of the bloody business of war.

Their story embraces many of the great themes of medieval military endeavour: the Crusaders and the deadly contest between Islam and Christendom, the Mongols and their vision of world dominion, Tamerlane and the rise of the Ottoman Empire whose own slave soldiers, the Janissaries, would be the Mamluks' final nemesis.


A truly fascinating book about a very special group of people. James Waterson makes as clear as possible the complex history of the Middle East from 1250-1517 focusing on the Mamluks. So many influences, not least that of religion, were at work over much of Asia which led to considerable flux and conflict. Who was on the move Mongols, Turkomen, Crusaders? Who was leading them? What internal disputes did every group have at what time? For a significant period the Mamluks were unbeatable even when greatly out numbered how was this possible? Their demise is as interesting as their creation and being. This book answers so many important questions which keep the reader interested from cover to cover.
The well written text is supported by a set of useful maps, some beautiful illustrations and a strong bibliography.
This is a remarkable book which we highly recommend.

The book provides lots of snippets from other sources too. I found a British Library page on one Mamluk treaty of Horsemanship which covers both military tqctics and weapon use, as well as trick riding for events and shows. If you are a student of military history, and combat systems, you need to be reading this book.