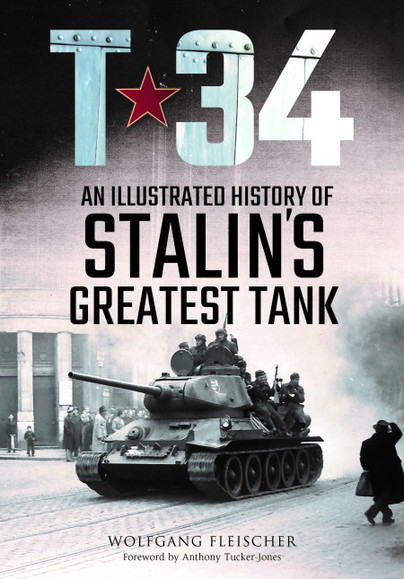 Click here for help on how to download our eBooks
Add to Basket
Add to Wishlist
You'll be £8.99 closer to your next £10.00 credit when you purchase T-34. What's this?
Need a currency converter? Check XE.com for live rates

This book is a stand-alone technical reference on the Soviet tank... Translated from the original German language work, this is an excellent addition to anyone's T-34 reference library.

This book gives a wide-ranging and detailed account of the design and development of what was arguably the best tank of World War II. The text is translated from the original German but it is well done, easy to follow and comprehensive. There is a vast array of photographs that serve to illustrate the points made in the text and the numerous drawings are a real bonus. There is little mention of combat history and the information on specialised variants and self-propelled guns is short but as previously outlined it would be impossible to cover every aspect of the T-34 in a single tome. This book is a valuable reference source for model makers and essential reading for anyone interested in the development of this most important tank. Highly recommended.

Pen and Sword are fast climbing up the ladder when it comes to publishing books and a vast array of them are based on the subject that you and I are interested in, and this offering has certainly surprised me. Stalin’s greatest tank is a title that I feel I have learned a lot about, from the outset when the T-34 showed itself on the battlefield with, issues including, tank crews that were not really trained to what can only be described, as to the right standard. The book, starts with a look at the design and an interesting piece on the T-34 design including an article written anonymously in the September 1943 issue of the Wehrnisches Monatasheft which described the T-34 as the successful Christe-copy?

The book is like most that I have been fortunate to review from Pen and sword easy reading and full of facts about the subject. It is picture heavy with some fantastic black and white photos of which I know that I have not seen before, another plus for me was the various T-34 variants that there were. These variants have their own section in the book. I totally recommend this book for all who love Russian armour or what was one of the hardest and biggest tank battles during World War 2 at Kursk, superb book.

... performs a terrific job in explaining the nuts and bolts of the tank, including the nuances that prompted later modifications.

This book will be of great interest to modelers and also to military historians.

I found the chapter on the development of the tank very interesting especially some of the earlier prototypes.

This is one of those books you should have on your shelf if tanks are your interest, or you’re a gamer thinking of building a Soviet force. It’ll also be a great reference material for model kit builders especially some of the images used in the book. It would definitely make someone a great present for Christmas.

This book is essentially a photographic history of this armoured vehicle from the start of Operation Barbarossa, to its defence of Moscow, actions at Stalingrad, victory at Kursk and finally advance through Warsaw to Berlin. With over 250 photographs, some colour, and a detailed history of the tank and variants, its personnel along with technical details and operational history as quoted above this publication certainly covers the subject thoroughly.

An excellent reference and a valuable resource for anyone with an interest in the story of the T-34.

As well as being an interesting book for the historian, it also sits well as a story and is well worth reading from cover to cover. I think, for the model-maker, it is invaluable; containing everything needed to build the internal and external parts, or even a variant. It will also serve well as a reference source for the student of military history.

A thoroughly definitive study of one of the world's historic engines of war.

I rate and recommend this book very highly. Five out of Five.

It is the best book on the T-34 (in English) that I am aware of and it deserves this reputation. If you have any interest at all in the T-34 and its history then this book is essential reading. The author has done an excellent job in researching and writing this wonderful book.

Fleischer's book, published by Greenhill Books, illustrates well the development of the vehicle most produced in the Second World War and which remained in service long after its conclusion. From an iconographic point of view, I consider it to be one of the most complete on the subject and it will certainly not be missing on the shelves of the libraries of enthusiasts and model makers.

This is about as comprehensive as anybody could want in tracing the development, production, operational deployment and technical elements of the T-34 and its derivatives. Whatever you might want to know about the tank is here. Supplemented by drawings, copious images and tables it is a go-to reference book. Interestingly it suggests that the disposability of the tank, predicated (as with the Sherman) on vast production capacity and a ‘militia’ army, was not so obvious. It details several improvements that were made to improve survivability. An interesting conclusion though is that about half the losses in the Belin assault were to Panzerfaust attacks, underlining that a well-armed and motivated infantryman could deal with these monsters.