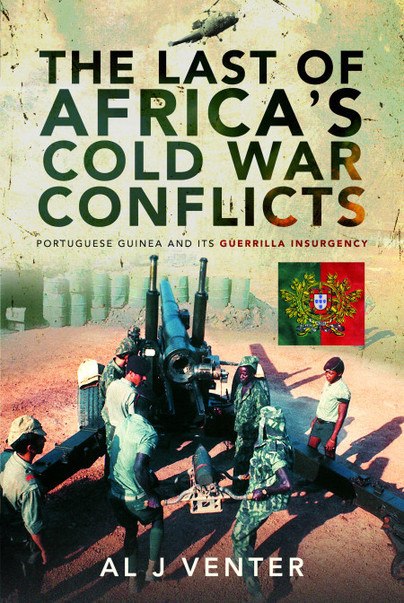 Portuguese Guinea and its Guerilla Insurgency

Add to Basket
Add to Wishlist
You'll be £15.00 closer to your next £10.00 credit when you purchase The Last of Africa's Cold War Conflicts. What's this?
+£4.50 UK Delivery or free UK delivery if order is over £35
(click here for international delivery rates)

Portugal was the first European country to colonise Africa. It was also the last to leave, almost five centuries later. During the course of what Lisbon called its “civilizing mission in Africa” the Portuguese weathered numerous insurrections, but none as severe as the guerrilla war first launched in Angola in 1961 and two years later in Portuguese Guinea. While Angola had a solid economic infrastructure, that did not hold for the tiny West African enclave that was to become Guine-Bissau. Both Soviets and Cubans believed that because that tiny colony- roughly the size of Belgium - had no resources and a small population, that Lisbon would soon capitulate. They were wrong, because hostilities lasted more than a decade and the 11-year struggle turned into the most intense of Lisbon's three African colonies.

It was a classic African guerrilla campaign that kicked off in January 1963, but nobody noticed because what was taking place in Vietnam grabbed all the headlines. The Soviet-led guerrilla campaign in Portuguese Guinea was to go on and set the scene for the wars that followed in Rhodesia and present-day Namibia.

"Venter was one of the few journalists who had the opportunity to visit the Portuguese areas affected by the conflict and report on the events there without restriction."

This is well-researched, clearly written and highly-recommended.

This volume's numerous insights about the components of effective counterinsurgency also apply to the current management of counterinsurgencies in Afghanistan and elsewhere.

One of the least known surrogate hot wars of the Cold War. The first European power to establish colonies in Africa was Portugal and this book provides an insightful review of the last insurrection in what had been the Portuguese Empire – Highly Recommended

This is fascinating and well-written account of a war that few remember. Anyone interested in Africa’s wars against European powers will want to read this book, while modern warfare students will glean much from it too. The Last of Africa’s Cold War Conflicts is one of the better books on war that I have read in 2020.