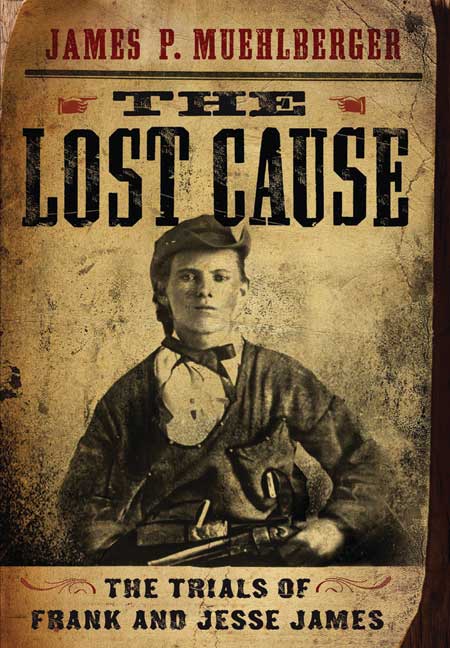 The Lost Cause (Hardback)

The Trials of Frank and Jesse James

Add to Basket
Add to Wishlist
You'll be £19.99 closer to your next £10.00 credit when you purchase The Lost Cause. What's this?
+£4.50 UK Delivery or free UK delivery if order is over £35
(click here for international delivery rates)

On a dreary December 7, 1869, two strangers entered the Daviess County Savings and Loan in Gallatin, Missouri. One of the men asked the cashier for change and then unexpectedly raised a revolver and shot him at point-blank range. Until now, this crime has been considered the first of a string of bank and train robberies committed by Jesse, his brother Frank, and other gang members. But a story has circulated for more than a century that the case was actually brought to trial by a young Missouri lawyer—and it was through this case that twenty-two-year-old Jesse W.

James was first identified as a criminal to the country—but no evidence for such an action could be found. After years of painstaking searches through dusty court archives across Missouri, defense attorney James P. Muehlberger finally discovered the historic documents in 2007. What these fascinating and important records reveal is that not only were the gunmen forced to leave a magnificent thoroughbred behind that linked James to the murder, but that the attack was not a bank robbery at all, but a calculated assassination in retribution for a Civil War killing.

The Lost Cause: The Trials of Frank and Jesse James is a thoroughly researched, yet thrilling account of the rise, pursuit, and prosecution of the legendary outlaw gang. Beginning with the new-found evidence of the Gallatin bank teller murder, the author explains how Jesse James attempted to avenge the death of his Confederate partisan leader, “Bloody Bill” Anderson, but shot the wrong man. Having lost his thoroughbred, Jesse stole another horse. Newly minted lawyer, Henry McDougal, brashly sued Jesse and Frank James for the loss of property, which would hang the murder on their heads. While Jesse professed his innocence and remained at large, his case was taken up by John Newman Edwards, editor of the Kansas City Times. Through Edwards’s pen, the James brothers were
transformed from petty criminals to noble outlaws still fighting for Southern American History honor—the “Lost Cause.” Not fooled by Edwards’s rhetoric and populist appeal, McDougal and others, including Pinkerton detectives and the governor of Missouri, led a behind-the-scenes fight to bring down the gang.

As the author explains, they first prosecuted lesser gang members, and by infiltrating the group, the authorities slowly unraveled the gang, with Jesse being shot by a paid informant in 1882. Frank James gave himself up, and in what was called the “trial of the century,” he was exonerated on all charges and retired to become a notable horse racing official until his death in 1915. Combining true crime, western adventure, and the transformation of America into a modern nation, The Lost Cause is engaging, entertaining history.