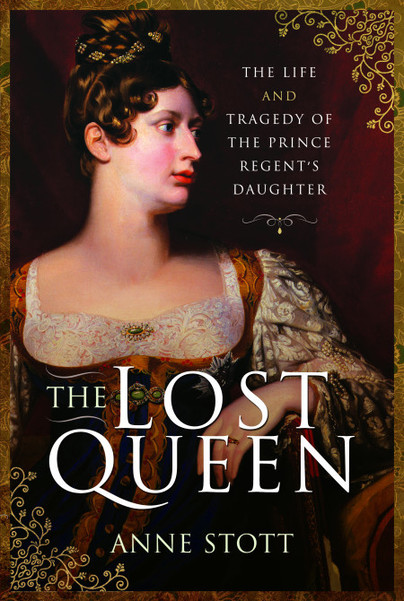 The Life & Tragedy of the Prince Regent's Daughter

Add to Basket
You'll be £20.00 closer to your next £10.00 credit when you purchase The Lost Queen. What's this?
+£4 UK Delivery or free UK delivery if order is over £30
(click here for international delivery rates)

As the only child of the Prince Regent and Caroline of Brunswick, Princess Charlotte of Wales (1796-1817) was the heiress presumptive to the throne. Her parents’ marriage had already broken up by the time she was born. She had a difficult childhood and a turbulent adolescence, but she was popular with the public, who looked to her to restore the good name of the monarchy. When she broke off her engagement to a Dutch prince, her father put her under virtual imprisonment and she endured a period of profound unhappiness. But she held out for the freedom to choose her husband, and when she married Prince Leopold of Saxe-Coburg she finally achieved contentment. Her happiness was cruelly cut short when she died in childbirth at the age of twenty-one only eighteen months later. A shocked nation went into mourning for its ‘people’s princess’, the queen who never was.

An entertaining and well researched book about an often forgotten royal, I recommend this book for any royal history lover.

I know very little about the Recency period of British history so I was interested to read this biography of Charlotte, Princess of Wales.
Born into a broken marriage, the majority her life was spent as the pawn of two parents who never had her best interests at heart. When she finally found happiness and independence, her life was cut short.
This is an incredibly detailed and well written biography of a woman, who had she become Queen, may have led Britain down a different path to her cousin, Victoria.

The Lost Queen is a biographical account of Princess Charlotte of Wales. Being the product of a very unhappy marriage, her parents used her as a pawn in their power struggles. As is the case with most monarchy, her parents were essentially non-existent from her life, which was probably a blessing in disguise. The author did a great job capturing the warring between her parents. Her father was a self-absorbed, greedy man who didn't keep it a secret that he hated his wife and preferred his mistress. Her mother had a couple of screws loose, needless to say.

I believe the princess benefited from her tumultuous childhood and it shaped her into a strong, self-confident woman. From an early age, this monarch was wise beyond her years, exhibiting political savvy and a level of maturity much greater than those surrounding her. It was apparent that she was learning from those around her by not only her tutors but also observing the behaviors of her relatives. She wasn't afraid to stand up for what she believed in, contrary to what others wanted her to believe in. Her subjects grew to love and appreciate her. This story by no means has a happy ending. Just when you think things are finally taking a turn for the better for Charlotte, tragedy strikes. It truly makes one think what kind of monarch she could have become. This was a well researched biography of this young monarch whose life was cut tragically short.

Princess Charlotte of Wales was born into tragedy as the only child of parents who had been at war since the moment they married. That Charlotte was born at all seems to be nothing short of a miracle. As the only legitimate child of the Prince of Wales (the future George IV) and Caroline of Brunswick, Charlotte was destined to become Queen one day. She fought her way to freedom, through the stifling circumstances of warring parents and unwanted marriage partners.

She found love with Prince Leopold of Saxe-Coburg and Gotha (who would – long after her death – become the first King of the Belgians) and finally had some happiness in her life. But as tragically as it began, it would end… Charlotte died shortly after giving birth to a stillborn son.

The Lost Queen: The Life & Tragedy of the Prince Regent’s Daughter by Anne M Stott brings Charlotte back to life, as she deserves. You can tell that the book has been thoroughly researched and it is well-written. As a reader, I continued to have hope for a different outcome, despite knowing better.

This was a biography that a fully enjoyed. I didn't realize it was a biography and was expecting a novel but i was riveted nonetheless. She really did have an interesting life and there is, sadly, not much written about her! Hope to read more about her in the future.

As I read this, I felt so sad for Princess Charlotte, who should have had a wonderful life but instead had so much misery, a little bit of happiness, and then (as happened to many women) had her life cut short by childbirth. It is amazing to think that had she (or her child) lived, history would have been so different...no Queen Victoria!

It was very well written and I enjoyed it.

Princess Charlotte was the daughter of Prince Regent and Caroline of Brunswick and was the heiress presumptive to the throne.

I'd always known Victoria wasn't born as heir to the throne but I knew little about Princess Charlotte and how her life and death impacted the Royal family and provided Victoria with the throne.

After reading this I hold a deep sympathy for Princess Charlotte, her parents forever at war with each other made her a pawn in their fight.

This thoroughly researched insight in to Charlotte's life shows how she faced one crisis after another, was kept practically a prisoner by her father and suffered ill health.

Princess Charlotte finally got a bout of happiness when she married Prince Leopold of Saxe-Coburg but this was short-lived as she died 18 months later following a complicated childbirth, the baby being stillborn.

On her death her royal uncle's were urged to marry as there was no longer an heir. One of these marriages produced Queen Victoria.

It's such a heartbreaking history for a Princess who only lived for 21 years and for the most part struggled with her relationship with her parents.
It really makes you think what would have happened if she'd lived?

Absolutely fantastic research by the author which has given me a nudge to learn more about this era I'd never really looked in to.

The Lost Queen is a comprehensive look at Princess Charlotte's life. I enjoyed reading more about her. I liked the detail the author provided about her parents history and tormented marriage. Charlotte wasn't the healthiest woman, either, which I had not known. I never really knew how she met Leopold and this reveals their story. She has such a brief life with not a lot of happiness. How different English history would have turned out and the British royal family had not she and her child died.

An interesting look at Charlotte's life from birth, marriage, parents relationship, friends and more. For those wanting a look at other members in the monarchy.

I was pleased with this book! I barely knew anything about Princess Charlotte and this book allowed me to learn so much while also not being overwhelming like some historical books can be.
If you're a fan of female rulers/princesses I definitely recommend this.

This is one of the best biographies I have read in a long time.
Thoroughly researched and based on so many letters and contemporary resources it recreates such a vivid picture of Princess Charlotte's life.
Her childhood is chaotic and miserable. She is at once spoiled and neglected. Her parents, the Prince Regent and Princess of Wales are selfish and childish and she is pawn in their power games.
Knowing the tragic outcome of Charlotte's life, as I read I was still almost hoping for a different ending.
A fascinating glimpse into Georgian life, the Prince Regent and the Royal Family.
Highly recommend this book and will purchasing an actual copy to read again as soon as it's available.

This is a very well written and researched book of how the royalty lived,their lives,the loves,marriages,of these people who were to be the King and Queen,Prince and Princess,they have the same problems that normal people do except their lives are on display and have to answer to the world, to their country,morally and politically! You will understand more about these people as you read and the children are the ones who pay the price in most cases! Read for yourself you will really enjoy England and her history and understand maybe a little bit more! Glad I didn't belong to this family,will you??

Nicely done. This is an engaging biography with all the appropriate drama to go with the Royalty. It often feels quite real, and the pacing is good. Recommended for historical fiction and non-fiction fans.

It never ceases to amaze me how there is so much written record on and by the British royal family from so long ago that writers can actually piece together really detailed accounts of the lives and loves of those personalities. Some of these writers do such a wonderful job that you actually enjoy these histories.

Anne Stott did marvelously with the biography of Princess Charlotte and her really dysfunctional family.. You really get a sense of all that she went through, and actually feel sad that she died so young just when she had found some happiness at long last. You also actually felt you could strangle her father the awful Prince Regent at the time.

I read this book cover to cover, and then went online to read a bit more about them!

I could not put it down. Princess Charlotte was born between a rock and a hard place. His father was self indulgent, self absorbed and had decided ahead of time, the wife chosen for him would never be honored or loved. His wife, a sheltered young woman who had little knowledge of her future role in history or even how to care for her own personal hygiene. For years, Princess Charlotte was manipulated between her parents and grandparents. Her grandfather was George III of England, who floated in and out of sanity. In spite of her horrible past, she found the courage to insist on choosing her own husband rather than accept the one her father tried to force on her.

Should things have gone differently, there might never have been a Queen Victoria. Queen Charlotte might have been known for her bravery, her care of the poor and the love of her family.

Anne graduated with First Class honours in History from UCL, since then she has mainly taught in adult education. She has been a part-time tutor for Birkbeck, University of London and the Open University. She is now a tutor for the WEA (Workers' Educational Association). She has written biographies of the Evangelical philanthropist, Hannah More, and William Wilberforce for Oxford University Press. She has had media appearances with Moira Stuart, Melvyn Bragg and Amanda Vickery. She lives in Kent with my husband, and have two grown-up children and three grandchildren.