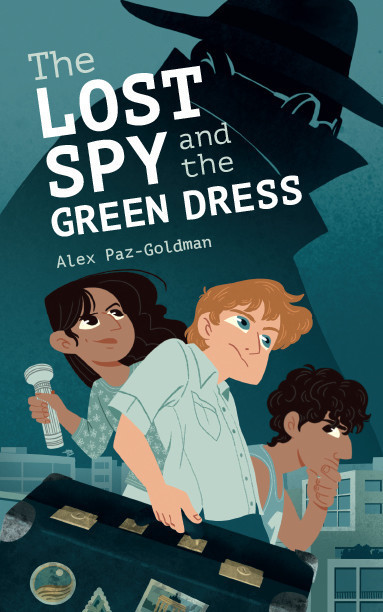 The Lost Spy and the Green Dress (Paperback)

Add to Basket
Add to Wishlist
You'll be £8.79 closer to your next £10.00 credit when you purchase The Lost Spy and the Green Dress. What's this?
+£4.50 UK Delivery or free UK delivery if order is over £40
(click here for international delivery rates)

For twelve year-old Motti, growing up in Israel in the 1960s, the world is full of mysteries to be solved, while his town is full of spies to be caught. His parents are Holocaust survivors, struggling to build a new life for themselves but, to Israeli-born Motti, they are nothing but an embarrassment. Unlike them, he will not be a victim; he will be bold and strong and fearless.

So, when Motti and his best friend Reuven identify a suspicious, elderly man in the neighbourhood as a potential German spy, they set out to unmask him, determined to root out the enemy and defeat him. Thus ensues a series of adventures, investigations, near misses and the repeated appearance of a green dress.

Aided by Reuven’s sister Aviva, they finally solve the case and, in the process, Motti uncovers some secrets closer to home, secrets like: what does his mother hide away in her private drawer? Why did she have to go on a trip to Germany? And what exactly is she refusing to say about her past?

An homage to classic children’s mystery books such as Enid Blyton’s Secret Seven, this is a tightly-plotted, funny, and complex story which explores heavy themes – the Holocaust, trauma, mental health and poverty – with nuance, a lightness of touch and a cast of compelling young characters.

Featured in the catalogue of

Alex Paz-Goldman was born in Israel in 1955 to Holocaust survivor parents. He has a BSc in Computer Science from the Israel Institute of Technology, and an MA in Child and Youth Culture from Tel Aviv University. His short stories have appeared in publications including Einayim, the most popular children's magazine in Israel and his first book, Adventures in a Small Town (with Iris Argaman) has been adapted for the stage. The Lost Spy and the Green Dress is his second book and, like the first, is recommended by the Israel Ministry of Education. In 2017, Paz-Goldman was awarded the Devorah Omer Prize for Youth Literature. He lives in Tel Aviv.