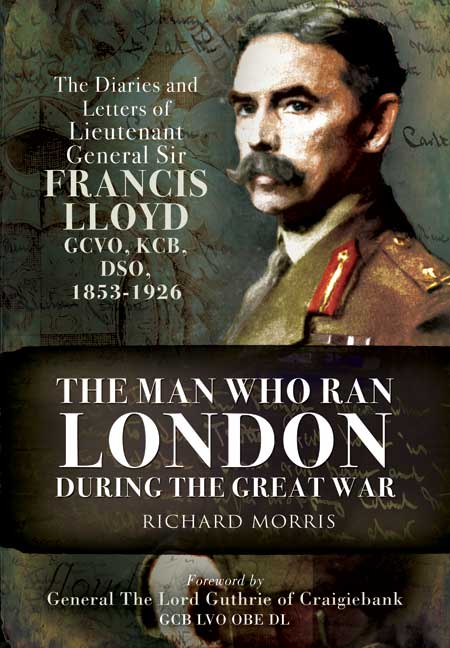 The Man Who Ran London During the Great War (Hardback)

Add to Basket
Add to Wishlist
You'll be £13.99 closer to your next £10.00 credit when you purchase The Man Who Ran London During the Great War. What's this?
+£4.50 UK Delivery or free UK delivery if order is over £35
(click here for international delivery rates)

In 1913 Lieutenant General Sir Francis Lloyd was appointed to the supreme position reserved for Guardsmen, the command of the London Districts. The war saw an extension of his responsibilities to include the hospitals and main railway termini in the metropolis. He was also put in charge of the construction of the defensive circle of trenches around London.

Whether it was meeting hospital trains returning from the front with wounded soldiers, or visiting areas of the City that had suffered from the Zeppelin and Gotha Bomber air raids, Francis Lloyd’s presence would help to revive the population’s flagging morale. This led him to be described by newspapers as ‘The Man who runs London’.

Francis Lloyd had the gift that so many distinguished men from Wales have, of oratory. Earlier in his career he had commanded the Welsh Division of the newly formed Territorials. He used this experience to great effect during the Great War in the vital recruitment campaigns around London.

Lloyd was a Grenadier Guardsman and served in two campaigns in the Sudan and in South Africa during the Boer War, where he was severely wounded.

After a career in the City of London, Richard Morris OBE has pursued a lifetime interest in the history of his home county, Essex, and its links with London. He is the author of The Powells in Essex and their London Ancestors (2002), The Verderers and Courts of Waltham Forest 1250-2000 (2004) and Merchants, Medicine and Trafalgar: the history of the Harvey Family (2007). He lives at Loughton, Essex.


This book contains the interesting and exciting “Diaries and Letters of Lieutenant General Sir Francis Lloyd GCVO, KCB, DSO”. He was perhaps the most well known military leader in the capital during the Great War. Only Guardsmen can hold the supreme position of the Commander of the London District and he attained this pinnacle in 1913.

His responsibilities were enhanced by the outbreak of World War 1 and for the following five years he had massive sweeping powers in the city. This position was the climax of a successful career in the Grenadier Guards. The General’s personal papers were bequeathed to his old regiment and they can be found in the regimental museum. The first twenty years of his diaries are in Lloyd’s handwriting and thereafter the manuscripts were typed and bound together in annual volumes.

During the Sudan campaigns of 1885 and 1898, and for part of the Boer War he wrote many letters home to his wife, Mary. These letters contain extensive comments about life in the campaign. Although his letters home have survived the same has not happened to her letters. About 300 letters from Sir Francis were donated by his nephew to the National Army Museum where they may be studied.

Lloyd was commissioned into the Grenadier Guards and his “Baptism of Fire” was at Suakin. He was awarded a DSO at Omdurman and was severely wounded at Biddulphsberg during the Boer War. As a serious career soldier he had ambition and was undoubtedly the right man for the post of GOC London District. These great powers earned him nicknames from the press such as “The man who ran London” and “the military governor of London”. Although he would have preferred a field commission during the Great War he still made an outstanding contribution to the war effort.

As Lloyd left so much correspondence and his diaries we are fortunate that the distinguished author, Richard Morris, has been able to access them and other material in order to produce this fascinating story about a most famous Guardsman and General. The book illustrates and informs us about soldiering, the society life and the background of the General.

Most generals of the British Army have made their reputations on the battlefield but Sir Francis will always be remembered as the GOC London District. He had a fascinating life and career which is amply illustrated by the author’s treatment of the subject. Mr Morris OBE has produced an outstanding and exciting book which is to be commended. The book illustrates Sir Francis’ life and the author has done sterling work.

Francis Lloyd was an old school Grenadier officer who was GOC London District throughout the First World War. This was an extremely complicated post which, under the Defence of the Realm Act, made him, as a newspaper described, "Military Governor" of London. His responsibilities included 200 hospitals and all the main railway stations. If he was a fearsome disciplinarian, Lloyd was an inspirational speaker, brilliant administrator and, surprisingly, a bit of dandy. Richard Morris gives an account of a forgotten but powerful figure and an insight into another age showing they did things differently then.

Very differently. Born in 1853, Lloyd's coming of age involved a sports day on the family estate with five horse races, speeches, a dinner for the workers, a ball for 400 guests, presentation of silver from the domestic staff, parish bells ringing and "public rejoicing". He won a DSO at Omdurman and was seriously wounded in the Boer War and was absolutely the right man "to run London".

Lloyd was opposed to conscription and recruited the London Volunteer Regiments with great skill and thought. He launched and raised funds for free railway station buffets for soldiers - a big deal: 25,000 were served per week at Victoria alone. Zeppelin raids were met with co-ordinated search lights and gun groups, though it was the introduction of incendiary bullets that did for the airships. The Zep raids were enormously destructive in their hey day - and lest we think the Capital's citizenry too good to be true, bombsites saw troops posted to prevent looting. London defence regiments were created to dig trenches as an anti-invasion measure. Though few took the threat seriously, in Essex alone over 14, 000 were involved in this activity. Lloyd recognised early on that large numbers of convalescent hospitals were required and his keen mind soon overcame the logistical problems. Postwar battles with the Ministry of Pensions marked him as almost a prototype Douglas Haig.

Instructed by Kitchener to create the Welsh Guards "immediately", Lloyd showed no hesitation. In 1920 Lloyd was fundamental in campaigning to save the Irish and Welsh guard as separate regiments Every paper (bar The Morning Post) published his scathing attacks on this "great outrage". The War Office retreated and Lloyd retired after 46 years of service aged 67.

While the book's main story describes Francis Lloyd, it also gives insights into another time almost as a social narrative where people behaved differently in a world quite unlike our own.. But The Man Who Ran London shows how some qualities are universal and Richard Morris remembers a man of enormous achievements who should have never been forgotten in the first place.