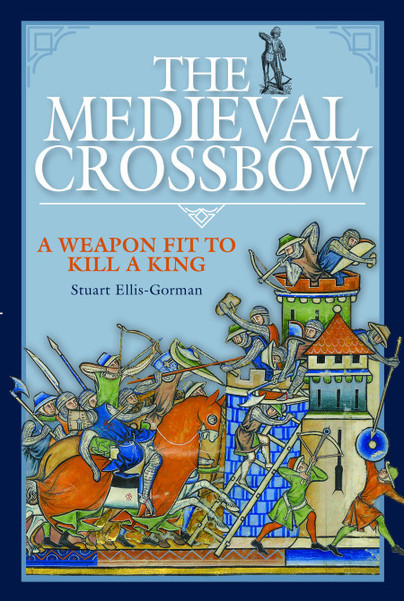 A Weapon Fit to Kill a King

Add to Basket
Add to Wishlist
You'll be £17.50 closer to your next £10.00 credit when you purchase The Medieval Crossbow. What's this?
+£4.50 UK Delivery or free UK delivery if order is over £35
(click here for international delivery rates)

The crossbow is an iconic weapon of the Middle Ages and, alongside the longbow, one of the most effective ranged weapons of the pre-gunpowder era. Unfortunately, despite its general fame it has been decades since an in-depth history of the medieval crossbow has been published, which is why Stuart Ellis-Gorman’s detailed, accessible, and highly illustrated study is so valuable.

The Medieval Crossbow approaches the history of the crossbow from two directions. The first is a technical study of the design and construction of the medieval crossbow, the many different kinds of crossbows used during the Middle Ages, and finally a consideration of the relationship between crossbows and art.

The second half of the book explores the history of the crossbow, from its origins in ancient China to its decline in sixteenth-century Europe. Along the way it explores the challenges in deciphering the crossbow’s early medieval history as well as its prominence in warfare and sport shooting in the High and Later Middle Ages.

This fascinating book brings together the work of a wide range of accomplished crossbow scholars and incorporates the author’s own original research to create an account of the medieval crossbow that will appeal to anyone looking to gain an insight into one of the most important weapons of the Middle Ages.

An excellent and detailed treatise on the history of medieval crossbows, with many references. Before reading the book, I was unaware that comparatively few crossbows have survived through to the present time, and that only a few eyewitness accounts mention the specific use of crossbows in battles.
The author gives fascinating details of the development of crossbow technology across the centuries until they were gradually superseded by firearms. Some of the earlier versions were adapted to fire stones or lead balls. by the means of a small pouch. These were more suited to hunting than battle.
It is interesting to note that medieval armies often mixed longbow archers with crossbowmen in the same unit, with sometimes quite impressive results. The crossbowmen certainly deserved their enhanced pay, crossbows were very expensive to purchase and difficult to maintain compared to a bow.
I can thoroughly recommend this book to military buffs and historians.

Dr Stuart Ellis-Gorman has a passion for the Middle Ages and medieval archery born of a childhood fascination with Robin Hood and Lord of the Rings. He made a special study of the history of the longbow and the crossbow for his PhD at Trinity College Dublin and has presented on the medieval crossbow at multiple academic conferences. He is an active and award-winning contributor to the internet’s largest public history forum, /r/AskHistorians, and reviews history books for a range of academic publications. He lives in Ireland with his wife and daughter..