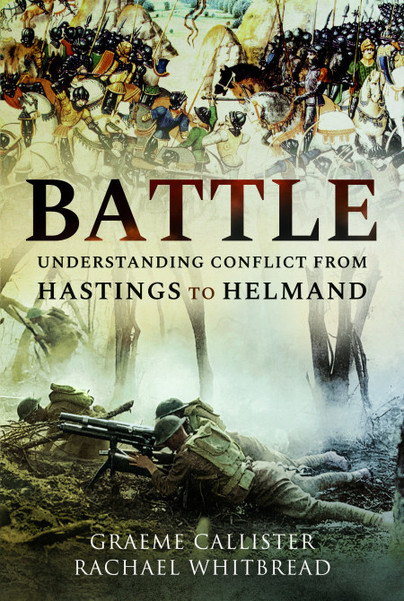 Understanding Conflict from Hastings to Helmand

Preorder
Add to Wishlist
You'll be £20.00 closer to your next £10.00 credit when you purchase Battle. What's this?
+£4.50 UK Delivery or free UK delivery if order is over £35
(click here for international delivery rates)

What are the critical factors that determine the outcome of battles? Which is more decisive in a clash of arms: armies or the societies they represent? How important is the leadership of the commanders, the terrain over which the armies fight, the weapons they use and the supplies they depend on? And what about the rules of war and the strategic thinking and tactics of the time? These are among the questions Graeme Callister and Rachael Whitbread seek to answer as they demonstrate the breadth of factors that need to be taken into account to truly understand battle.

Their book traces the evolution of warfare over time, exploring the changing influence of the social, political, technological and physical landscape on the field of battle itself. They examine how the motivation of the combatants and their methods of fighting have changed, and they illustrate their conclusions with vivid, carefully chosen examples from across a range of Western European military history, including the Norman Conquest, the Hundred Years War, the Wars of Religion, the Napoleonic Wars and the world wars, and beyond.

By exploring the wide range of interconnected factors that influence the results of battles, the authors broaden the study of this aspect of military history from a narrow focus on isolated episodes of conflict. Their original and thought-provoking writing will be fascinating reading for all students of warfare.

Dr Graeme Callister is a Senior Lecturer in History and War Studies at York St John University, with extensive experience of researching and teaching the history of warfare. He is also a Fellow of the Royal Historical Society. He received his PhD in History from the University of York, and his first book, War, Public Opinion and Policy, was published in 2017. His most recent work has been on the British campaign in the Low Countries in 1793-5 and on conscription in Napoleonic France.

Dr Rachael Whitbread has a PhD in History from the University of York. Her thesis focused on warfare and formal combat in late-medieval Western Europe and she has produced several papers on the subject. She has considerable experience as a secondary school history teacher, having previously taught history at undergraduate and MA level. Her MLitt from the University of St Andrews included a dissertation exploring chivalry and warfare in the reigns of Henry IV and Henry V.