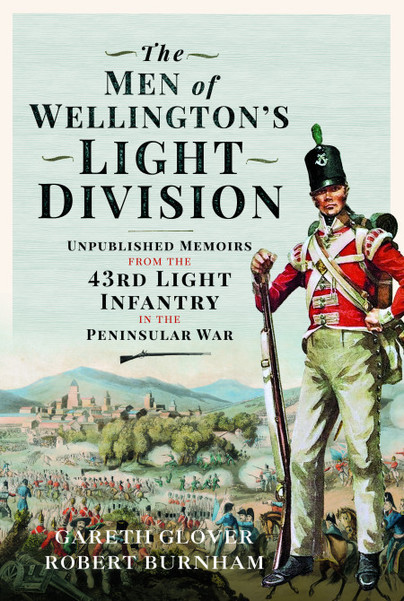 Unpublished Memoirs from the 43rd Light Infantry in the Peninsular War

Preorder
Add to Wishlist
You'll be £20.00 closer to your next £10.00 credit when you purchase The Men of Wellington’s Light Division. What's this?
+£4.50 UK Delivery or free UK delivery if order is over £35
(click here for international delivery rates)

Some of the most famous memoirs of Britain’s long war against Napoleon have come from the pens of members of Wellington’s Light Division, but many wonderful accounts were never published and have sat in archives, libraries, museums, and private collections, forgotten for 200 years.

The regiments of the Light Division, and its predecessor, the Light Brigade, were involved in almost every major battle and skirmish fought by Wellington and Sir John Moore in the Peninsular War. Unlike the line infantry, these men were encouraged to think and fight independently and were, often, of a higher educational standard, resulting in vivid descriptions of warfare and campaign life.

However, these memoirs do not simply cover old ground. Many of these accounts were produced within hours, or at most days, after the incidents they describe, and they often portray a very different view of many famous events and cause us to question numerous claims made in those later published memoirs.

Never intended to be published, the memoirs in this book were written only for the men themselves and their families, being penned without the dreaded influence of ‘hindsight’ to alter and temper their views. Consequently, they provide brutally honest assessments of their senior officers, how operations were handled and who made mistakes that have subsequently been quietly covered over.

The Men of Wellington’s Light Division is certain to be welcomed by historians and enthusiasts alike, providing a glimpse into the past that has not been seen before.

Waterloo: The Defeat of Napoleon's Imperial Guard Henry Clinton, the 2nd Division and the End of a 200-year Old Controversy (Hardback)

This is the most detailed account of the 2nd Division at Waterloo ever published. It is based on the papers of its commander Sir Henry Clinton and it reveals for the first time the previously unrecognised vital role this division made in the defeat of Napoleon. They Swept the Field Clear explains how the division was placed ahead of the main allied squares thus impeding the charges of the French cavalry, and how the 2nd Division supported the defence of Hougoumont, considered by the Duke of Wellington as the key to his victory on 18 June 1815. Perhaps the most significant aspect of this book is…