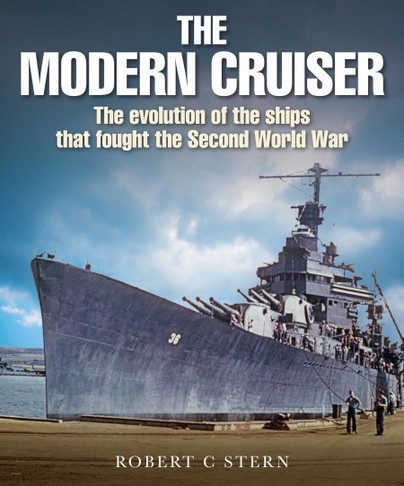 Add to Basket
Add to Wishlist
You'll be £35.00 closer to your next £10.00 credit when you purchase The Modern Cruiser. What's this?
+£4.50 UK Delivery or free UK delivery if order is over £35
(click here for international delivery rates)

As one would expect from this publisher, the book is produced to a high standard, with a wide range of excellent photographs, as well as source notes. Although in 'coffee table' format, thanks to the author's lively writing style the work succeeds both as a readable operational history and as a reference for researchers. This is an important contribution to the historiography of the Second World War at sea, deserving a wide readership among historians and general readers.

The Modern Cruiser is an important and informative book that should be required reading for all those with an interest in 20th century cruiser design.

The photographic content has been used to good effect to enhance the text while I found the copious end notes to be interesting and useful. In my opinion, this book is probably the best single volume account of the subject to date and I have no hesitation in recommending it to all cruiser enthusiasts.

The Modern Cruiser is a very detailed book covering every aspect of those vessels from drawing board to combat performance. Stern examines individual ships and classes throughout, highlighting improvements but also their problems. The result is a real sense of evolution, befitting the book’s subtitle. Stern’s discussion of the politics of Cruiser building is well-balanced and informative, particularly the chapters on between-the-wars initiatives. A superb collection of photographs illustrates Stern’s thoroughly researched and well-written book. Anyone interested in 20th Century warships will enjoy this book.

Another well-crafted book from a leading author in his field. An entertaining and informative review of the evolution of one of the most important classes of warship, from the technology of WWII, into the missile age – Most Highly Recommended

The book proceeds in chronological order in 12 chapters, there are abundant first class photographs and some helpful technical drawings to illustrate points in the text. The work covers most of the large and medium navies of the world and looks at how the different design trends developed and evolved.

The book runs to 259 pages with an excellent set of notes, list of sources and a good index. The obvious omission is HMS Belfast, ironically one of the few surviving cruisers. Printing is to a high standard by Seaforth Publishing. The book is aimed at the serious naval reader and would make a handy tool for further research. Technical gunnery types will also find plenty to keep them interested. For landlubbers there is a convenient list of abbreviations and acronyms on page 8-9.

Having undergone a convoluted development, cruisers vary more in their characteristics than any other warship type. I have to confess that in my time I would have liked to serve in a cruiser – halfway between the snug living of a destroyer and the huge complexity of a capital ship. Stern chronicles the fortunes of this ship-type in the twentieth century, beginning with a brief summary of development before the First World War and an account of a few notable cruiser actions during that conflict that helped define what cruisers would look like in the post-war world. The core of the book is devoted to the impact of the naval disarmament treaty process, which concentrated on attempting to define limits to the numbers and size of cruisers that could be built. How the cruisers of the treaty era performed in the Second world War forms the final focus of the book, which concludes with a look at the fate of the cruiser-type since 1945. This single-volume account of the complex development of the cruiser gives me a fine insight into the breed and makes for a comprehensive reference for all students of naval warfare.

I think that we need to say from the start that this is a very comprehensive and detailed book about the modern day cruiser, and it contains magnificent detail, information and reference. The book is obviously spilt into a number of chapters such as looking at the birth of cruisers, getting through WWI, and from then on the various chapters look at the cruiser through the various years of development in like 5 – 10 year chunks. This book looks at cruisers from all around the world but it goes into depth about various ships in design, dimension, build, calibre and military firepower.

Now I should admit I am no expert on Naval Warfare or the vessels that command the oceans, but I feel after reading through that I have learnt an awful lot, not just about dimensions and types of ship needed but especially in this book a lot about the laws and rules of building a fleet. This book most certainly reads and feels like a definitive and important book, written by an author Robert C. Stern who is clearly an expert and knowledgeable person having written about this subject for nearly 30 years. So credit goes to the author for is clear and comprehensive writing and Seaforth Publishing for bringing us a brilliant book. I should also comment that the pictures, photographs and diagrams within this book are fantastic and certainly do complete the book. So from someone who most certainly an expert on this subject, I would happily give it a 5 star rating.