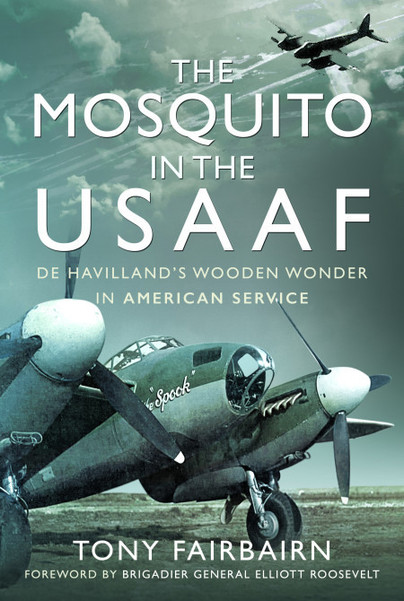 The Mosquito in the USAAF (Kindle)

Click here for help on how to download our eBooks
Add to Basket
Add to Wishlist
You'll be £9.98 closer to your next £10.00 credit when you purchase The Mosquito in the USAAF. What's this?
Need a currency converter? Check XE.com for live rates

On 20 April 1941, a group of distinguished Americans headed by the US Ambassador to the United Kingdom, John Winant, and which included Major General Henry ‘Hap’ Arnold, Chief of the US Army Air Corps, visited the de Havilland Aircraft Company’s airfield at Hatfield, England.

The party was there ostensibly to gain an insight into how various US aircraft supplied to Britain were performing, as well as to observe some of the latest British products being put through their paces. The eighteen types on display included both US and British bombers and fighters. But the star of the day was undoubtedly the de Havilland Mosquito.

Having first flown only a few months earlier, on 25 November 1940, the aircraft that was put through its paces was flown by none other than Geoffrey de Havilland. Striving to impress the trans-Atlantic visitors, de Havilland provided an outstanding display of speed and manoeuvrability. It was a routine that impressed the Americans and left them in no doubt as to the Mosquito’s abilities.

Though the visitors harboured doubts about an aircraft made of wood, they returned to the United States with full details of the design. The Mosquito had also caught the eye of Elliott Roosevelt, son of the US President and a serving officer in the USAAC. An early specialist in military aerial mapping and reconnaissance, ‘ER’ swiftly realized the value of the Mosquito in the reconnaissance role and began lobbying vigorously for its acquisition. The Air Ministry duly noted ‘ER’s’ interest and influence.

Following America’s entry into the war, formal requests for Mosquitoes began in earnest in 1942. Initial deliveries for evaluation purposes in the United States soon followed in June 1943, the aircraft initially being supplied by de Havilland Canada. From February 1944 a steady flow of the photographic reconnaissance version, from Hatfield, were provided to what would become the USAAF’s 25th Bomb Group at Watton, England. There they served with distinction in a variety of specialist roles, including day and night photography, weather reconnaissance, ‘chaff’ (Window) dropping, scouting for the bomber force, raid assessment, and filming of special weapons projects.

A number of these Mosquitoes, serving with the 492nd Bomb Group at Harrington, were involved in the so-called ‘Joan-Eleanor’ project, working with OSS secret agents on the Continent. Finally, in 1945, the USAAF received much-anticipated night fighter Mosquitoes which enjoyed combat success with the 416th Night Fighter Squadron in Italy.

In this highly illustrated work, the author explores the full story of why the Americans wanted Mosquitoes, how they went about obtaining them, and their noted success and popularity with USAAF units.

The son of an RAF pilot, TONY FAIRBAIRN’s childhood was spent on a variety of airfields around the world, which fired an early enthusiasm for aviation journalism and photography. While still at school in Singapore in the early 1960s he wrote his first article, for Air Pictorial, and then joined the RAF for a 30-year career. An active member of the RAF Historical Society, the American Aviation Historical Society and Air-Britain, he has authored two books, Action Stations Overseas and RAF Gibraltar, and over the years contributed to most of the national aviation magazines. His RAF duties included tours in Cyprus, Gibraltar and as an instructor at the RAF College, but it was a 1970s posting to East Anglia, an area resonant with disused American wartime airfields alongside current active ones, that sparked an interest in US aviation in general and the Second World War Eighth Air Force in particular.