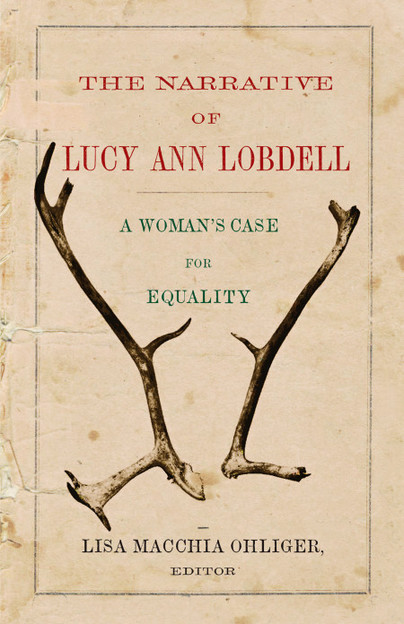 A Woman’s Case for Equality

Add to Basket
Add to Wishlist
You'll be £19.99 closer to your next £10.00 credit when you purchase The Narrative of Lucy Ann Lobdell. What's this?
+£4.50 UK Delivery or free UK delivery if order is over £35
(click here for international delivery rates)

Lucy Ann Lobdell (1829–1912) was an ordinary woman whose extraordinary life was shaped by personal strife and the hardship of life in early nineteenth-century upstate New York. Struggling with an abusive husband, a young child, ailing parents, and financial strain, Lucy did what was necessary to support her family. In a rural world defined by farming and lumbering, she dressed, labored, and lived in a traditional masculine role. Her prowess as a rifle shot and fiddle player were known locally, but because of her uncon- ventional, androgynous lifestyle, she became a target of public gossip and ridicule. Educated and eloquent, Lucy penned and published, The Narrative of Lucy Ann Lobdell, the Female Hunter of Delaware and Sullivan Counties, N.Y., in 1855. Only two copies are known to exist. The narrative provides a unique look at the persecution of a woman whose only “offense” was disregard for contemporary societal norms. After her husband was killed during the Civil War, she received a widow’s pension. Ostracized and eventually hospitalized in 1880, she underwent torturous treatment until she confessed to a doctor that she was “a man in all that the name implies,” a self-serving report the doctor used to promote his career.

Whether Lucy was a lesbian, cross dresser, or transgender, we don’t know from the historical record, but as Lisa Macchia Ohliger demonstrates in The Narrative of Lucy Ann Lobdell: A Woman’s Case for Equality, Lucy embodied the nascent women’s rights movement. At the same time, and not far from where Lucy lived and went to school, Amelia Bloomer was advocating the right for women to wear pants and was publishing the feminist newspaper, The Lily, while Susan B. Anthony was pushing for land rights and equal pay for women. All of these issues are found in Lucy’s account. Lucy’s life is an illustration of the historical significance and destructive power of gender in society, and her narrative bears painful witness to the clash between taboo and survival.

LISA MACCHIA OHLIGER is a member and volunteer for the Wayne County (Pennsylvania) Historical Society where she is helping to restore the two-hundred-year-old Daniels’ Farmstead and Delaware & Hudson Canal. She also teaches and coordinates art and history programs for the society. A graduate of the SUNY College at Oneonta and an accom- plished artist, she has exhibited her work internationally. She lives in Honesdale, Pennsylvania, with her husband and children