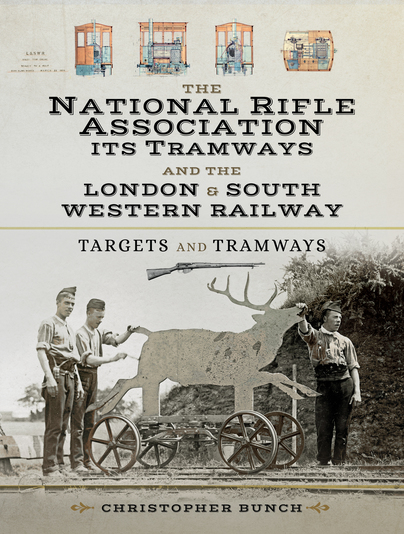 Add to Basket
Add to Wishlist
You'll be £30.00 closer to your next £10.00 credit when you purchase The National Rifle Association Its Tramways and the London & South Western Railway. What's this?
+£4.50 UK Delivery or free UK delivery if order is over £35
(click here for international delivery rates)

In 1859, as a result of the perceived threat to Great Britain from the large increase in conscript armies on the Continent and especially the growing power of France, and given further impetus by a public outcry for improvements in the Country’s defence, a new Rifle Volunteer Movement, based on that of the Napoleonic Wars, was quickly formed to great popular enthusiasm.

This led, in the same year, to the formation of the National Rifle Association designed to encourage rifle shooting by the establishment of a great annual National Rifle Meeting open to both Volunteers and all-comers. There marksmen could compete for valuable prizes. To achieve this it was necessary to ensure that the location, initially on Wimbledon Common and later at Bisley, was readily accessible by train.

An extraordinary relationship now developed between the Association and the London and South Western Railway Company, and its successors, in fulfilling these aims. The culmination of this was the construction of the Bisley Camp Tramway which connected the L&SWR mainline at Brookwood with the NRA Camp. Interlinked with this is the fascinating story of the Association’s own unique tramways. These carried competitors and spectators to the more distant ranges as well as targets to the butts and for mobile targets. The military extensions to the Camp Tramway in both World Wars are also covered.

The book relates the history of the NRA and its tramways from its foundation until the end of the twentieth century largely through contemporary letters, documents and photographs.

The book is beautifully presented, incorporating numerous illustrations of historical documents, plans and photographs, many of which include views of the railway and its trains. By its very nature this is much more than another railway book, and historians will be thankful that the author has brought together a written history of this fascinating story in which the nation’s defence chiefs and the railways worked together for many decades.

"This book is a commendable study of the firing ranges, and the novel railways and tramways which served them at both sites."

This valuable contribution to the growing volume of high-quality railway history will introduce the reader not only to the long history of the NRA, and its railways, but also by implication, to the broader context within which they operated, a flavour of that lost can-do land that was to become the perplexed UK.

As featured on Michael's Model Railways

... it deserves a place on any bookshelf as it provides not only a comprehensive and fascinating history of the activities of the National Rifle Association and the organisation's railways at Wimbledon and Bisley but also their place in the history of Britain.

This is one of the most unexpected and intriguing books your reviewer has read in some time.

For those with a fondness for the stranger aspects of tramway history this lively and highly readable account will be a treat.

A good story of obscure and long closed lines, this book is thoroughly researched and the author has made good use of the NRA records. It is unlikely that anyone will better this book which manages to set short railways in a political and organisational context. Recommended both for keen marksmen and rail enthusiasts alike.

It is perhaps surprising that so much material was found for a large book about a subject like this. The amount of research that has gone into this book is to be commended and production is to a high standard. There is a full range of b&w and colour illustrations, maps and diagrams, including a set of colour drawings of Wharncliffe produced by the LSWR when it was overhauled in 1893/4. The system was extended during both World Wars to serve military camps and finally closed in 1952. The most impressive thing about this book is the amount of detail it contains.

If you have any interest in this subject you are most unlikely to be disappointed.

Lots of photographs and plans that allows you to know the history of the National Rifle Association.

Christopher Bunch has spent many years meticulously researching this interesting subject and not only covers the former railways and tramways at the NRA site at Bisley Camp but also the original site at Wimbledon.

This book is a masterpiece and highly recommended.

This volume was a delight to read, and bids fair to become the Standard Reference Work on the NRA, Bisley and Competitive Target Shooting in the United Kingdom. As such it is likely to be of interest to both Military and Social Historians and target-shooting enthusiasts of all persuasions. Members of the military may also find it of interest. Railway enthusiasts with an interest in both the London and South Western Railway and obscure, little known tramways, may also find it worthy of their attention. Railway modellers may also find the volume’s photographs and plans useful.

The volume accompanied by maps of the various polygons, photos of the various protagonists of the association and various documents will not be lacking on the shelves of fans of history of transport and fans of British history in general (since the book covers a bow Very vast thunderstorm, coming almost to our days). Another great book by Pen & Sword!

Christopher Bunch was born in Hampshire, where he still lives today. Whilst following a career with an international telecommunications company, he led tours of duty in Kenya, Mauritius, the Middle East and the Caribbean, before finally settling back in Britain. In retirement, after a spell in consultancy, he took up an interest in history. He acts as a part-time research assistant at the National Rifle Association Museum at Bisley and has written articles for the NRA Journal and the South Western Circular. In addition, he has also undertaken First World War studies for his local history society.