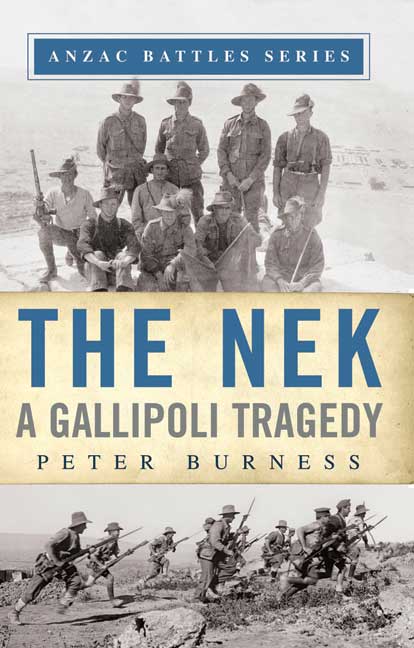 The Nek: A Gallipoli Tragedy (Paperback)

Add to Basket
Add to Wishlist
You'll be £9.09 closer to your next £10.00 credit when you purchase The Nek: A Gallipoli Tragedy. What's this?
+£4.50 UK Delivery or free UK delivery if order is over £35
(click here for international delivery rates)

One of the greatest tragedies in Australian military history occurred at Gallipoli on 7 August 1915, when hundreds of Australian light horsemen were repeatedly ordered to charge the massed rifles and machine-guns of the Turkish enemy. It was a hopeless endeavour, and the resulting bloodbath has horrified every generation since and been the subject of considerable scrutiny by historians.

The charge at The Nek, so vividly realised in Peter Weir's famous film Gallipoli, came to epitomise both the futility and courage of the Gallipoli campaign. In this classic book, Peter Burness describes the formation, training and character of the Light Horse regiments, and profiles the officers involved. His vivid account of the battle itself includes careful consideration of how the suicidal charges were allowed to continue when all hope of success was lost. For this new edition, the author has updated the text to include new information that has come to light since the book was first published in 1996, and he has also provided new maps and photographs.

A very valuable study of a costly military disaster.

First published in New Zealand in 1996 this book, with new photographs and maps, is claimed to be the best short account of Australia's most iconic battle.

An outstanding account of the ill-fated attempt to break the stalemate of Gallipoli on 7th August 1915 as hundreds of Australian Light Horsemen repeatedly charged against the mass rifles and machine-guns of the Turks. In this very well written and researched work, updated since its first publication 'down under' in 1996, the author provides a comprehensive account of the battle and of the men who took part. Superb 10/10.

“This book is a recent addition to the multi volume Anzac Battles Series, which collectively describe the military operations of the 20th century in which the armed forces of Australia and New Zealand played a significant part”
“The author has concentrated heavily on the individuals stories – both family and professional – of the officers and men who were to become directly involved in the slaughter of that fateful day”
“The 148 pages of text are supplemented by the eight pages of very well chosen contemporary monochrome photos”
“The theme and context of this publication will undoubtedly resonate mainly with the author's compatriots. The book, however does merit reading by a wider audience for its recounting of a classic example of the sadly all-too-familiar tale of the bravery of soldiers on the battlefield being squandered by their own commanders.

This short book, part of the ‘ANZAC Battles Series’, explores the action of the 3rd Light Horse Brigade on 7th August 1915 when four successive waves of dismounted Light Horsemen charged into a withering maelstrom of Turkish rifle and machine gun fire armed only with bayonets fixed to unloaded rifles, an action immortalised in the 1981 film Gallipoli. The book has comprehensive notes, and whilst it lacks a bibliography it is clear that the excellent resources at the Australian War Memorial have been widely consulted. With 400 casualties suffered by the attacking troops thankfully Burness does not lose sight of the ordinary soldiers who were involved, and intertwines their stories into the narrative. Several examples of men who survived the action only to lose their lives later on are given; such was the relentless and indiscriminate nature of the war.
Logical and well written, this is an excellent account of the action that day and the personalities involved, balanced by a measured analysis of the reasons for its failure.

I defy anyone to read this and not feel emotions of awe, anger, frustration and pity. I defy anyone to feel anything but deep admiration for men who went “over the top” at The Nek on 7 August 1915, knowing they were advancing into a murderous crossfire from the enemy and in most cases having to do so while stepping on the bodies of comrades slaughtered moments before. Peter Burness not only tells the tale but writes in such a way that it would be a cold fish who did not feel such emotions. Although it describes one very small action on a day where much more was going on in Gallipoli, which after all was a fairly small campaign in Great War terms, “The Nek: a Gallipoli tragedy” is a classic work and one I would encourage anyone with an interest in the war to read.
Concise, well written and based on strong academic research (which blows away all notion that The Nek was a British blunder other than at the very highest strategic levels), the book is illustrated with a good selection of photographs and one map. An appendix lists the dead and their places of burial or commemoration. I cannot recommend it highly enough.

Peter Burness is a Senior Historian at the Australian War Memorial in Canberra and the Memorial’s longest serving employee. A specialist in the battles of World War One, he has written several books on the subject, and has also worked on numerous permanent, temporary and travelling exhibitions. A long-serving member of the Armed Services
working group of the Australian Dictionary of Biography, he has contributed over 20 entries to the dictionary. Since 1994 he has led the Memorial’s annual tours to the Western Front.